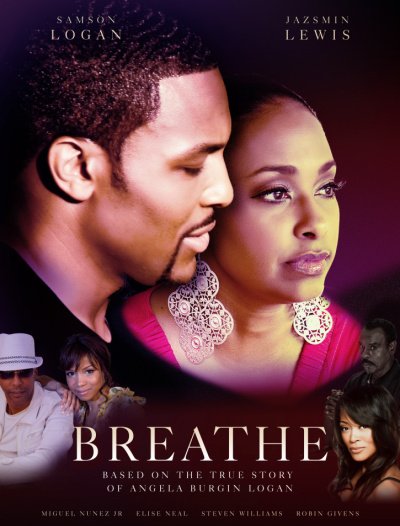 Netflix & Learn might not sound quite as cool as the more popular phrase “Netflix & Chill,” but anytime a film can entertain and educate it’s worth a watch. “Breathe,” executive produced by Angela Burgin Logan, portrays Angela’s true story of a near fatal pregnancy after her doctor failed to diagnose her with preeclampsia, a dangerous pregnancy complication that occurs in 5-8 percent of all pregnancies and is a leading cause of maternal deaths.

In the film, Angela (portrayed by Jazsmin Lewis) experiences many of the common symptoms of preeclampsia – elevated blood pressure, headaches, shortness of breath – only to have her concerns downplayed and dismissed by her doctor. Black women die 4 times faster than other populations from maternal health complications and Angela believes taking her story to the big screen was critical because Black women are often omitted from visual narratives on maternal health complications.

“I am proud that my film “Breathe” is the first dramatic film to make the issue of preeclampsia and maternal health complications for African-American women its central theme,” she shared with BlackDoctor.org. “Reading about a statistic and seeing it are vastly different to how we will process, internalize and react.”

The movie, which is currently streaming on Netflix, is as much about Angela’s miraculous story of surviving with only a 20 percent chance to live as it is a cautionary tale for women when it comes to getting the healthcare they deserve.

BlackDoctor.org recently went behind-the-scenes with Angela to learn how she’s helping other women to save their own lives.

BlackDoctor.org (BDO): With this being your first pregnancy, did your doctor or anyone ever talk to you and your husband about possible pregnancy risks and what’s considered “normal” during pregnancy?

Angela Burgin Logan (ABL): As this was my first pregnancy, I was excited, eager and equipped with what I thought was the right information and support to help me have a successful pregnancy. I consulted with my doctor about pregnancy risks and watch outs when I first learned that I was pregnant. We spoke of conditions such as gestational diabetes particularly, as I have parents who suffer from the disease, iron deficiency anemia, maintaining a healthy pregnancy weight and watching out for severe and persistent headaches. The disease of preeclampsia itself is not a condition that we spoke of or that he advised me about. I also reached out to other women who had successful pregnancies about what is considered normal during pregnancy. It became clear to me after having gone through my near miss that both women and health care providers need to be more aware of the pregnancy complication preeclampsia.

BDO: Looking back, what are the basic core questions every pregnant woman should ask her doctor? Are there specific tests she should ask for?

ABL: Every pregnant woman should be prepared to discuss the “three P’s” as I call it. The three “P’s” are having a “PEP” talk, getting personal with your health care provider and preparing your pregnancy plan. “PEP” is an acronym that stands for: Preeclampsia, which is pregnancy-induced high blood pressure. Embolism, which is a blood clot that moves to the lung and Postpartum hemorrhage, which is severe bleeding during or soon after giving birth. Your “PEP” talk with your doctor should include learning more about the signs and symptoms of “PEP” and what you will jointly do if you experience any of the issues associated with “PEP.” Next, you have to get personal with your doctor and health care providers. They need to know your history, age and any factors that could contribute to decreasing your chances of having a healthy pregnancy. Your personal background and history will help a doctor share with you what potential complications you could experience, as they vary according to ethnicity, age, weight, your overall health and more. After getting personal with your doctor that will allow your health care provider to share with you if you are at an increased risk for specific complications or conditions. Finally, you want to ask your doctor about creating a plan for you for each trimester of your pregnancy so that you can successfully get through each stage. Your plan will provide you with a complete understanding of what to expect during each trimester, including things like how much weight you should be gaining and at what rate.

Every pregnant woman should have specific tests which will vary based on a woman’s age and other health factors. However, as a rule the tests every pregnant woman should have are an ultrasound, which is test that will determine how far a woman is in her pregnancy, the size and position of the baby and can be used to determine if there are potential abnormalities with the baby. Blood tests and prenatal screenings are something every pregnant woman should have at various stages of her pregnancy. Blood tests will be used to determine everything from screening for infections, blood type, RH factor and can determine if there is the presence of elevated blood platelets. Urine tests are critical to take throughout your pregnancy A urine test is used to assess if you have a bladder or kidney infection, diabetes, dehydration and preeclampsia which can be assessed by screening for high levels of proteins, ketones and bacteria. This combined with having high blood pressure would indicate preeclampsia.