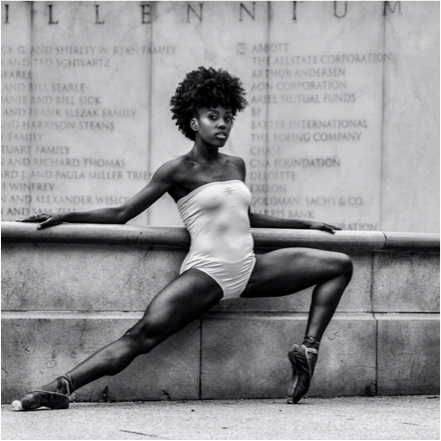 But if you look deeper, technology isn’t the only awe-inspiring beauty in the commercial. It’s Fraser whom suffers daily from scoliosis – a sideways curvature in the spine.

“I do experience muscle tightness because if your spine is S-curved, one side is compensating for the other, which then pulls on your pelvis, which then makes one leg longer than the other,” Fraser, 25, says while sitting inside a rehearsal studio at Visceral Dance Chicago, a contemporary dance company of which she is a founding member.

Fraser began dancing at 4 years old. According to her mom, she wouldn’t stop singing and moving around, so she put Fraser in ballet. Yet, while a freshman at The Ailey School in New York, Fraser received the worst news of her young life. “I had a curvature in my spine,” she explains. “The first doctor visit I had, I was told I needed surgery.

The Bronx native thought she would never dance again.

About 7 million people in America are living with scoliosis, an incurable disorder. The primary age for diagnosis is between ages 10 and 15, according to the National Scoliosis Foundation.