Celebrating 5 Years Cultivating the Next Generation of Theatre Supporters 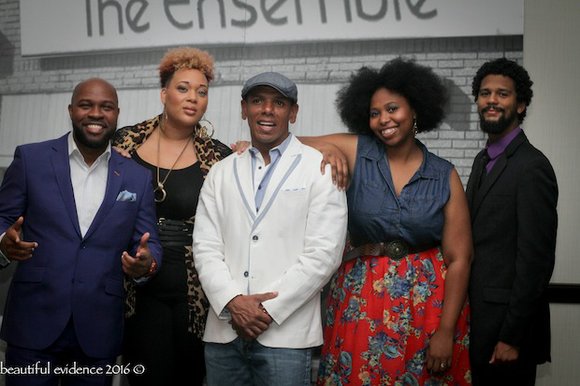 Houston area poets - Se7en the Poet, Bar None, D.E.E.P, The Fluent One, and Miss Pinky.

Houston area poets who joined this year’s poetry showcase included: Host Se7en the Poet along with Bar None, D.E.E.P, The Fluent One, and Miss Pinky.

Adrian Washington “DJ Adub” played the evening music mix of Neo Soul and hip hop tunes while more than 200 guests arrived for the pre-performance mixer and were treated to a decorative downhome 5-year anniversary yellow cake with buttercream icing. Marquee signs from The Ensemble Theatre’s previous shows added décor to the room, and the celebratory set design by James Thomas was the centerpiece; A suspended brick five layered with golden butterflies and white chiffon drapes with blue fluorescent backlighting set the ambience. Se7evn the Poet kept the audience laughing with his wit and humor while introducing the four featured poets: Bar None, D.E.E.P, Miss Pinky, and The Fluent One who all brought a very distinct style of performance poetry for the audience to enjoy.

Act One Young Professionals began hosting annual poetry showcase to create another platform for Houston area poets and establish a way to introduce younger audiences to The Ensemble Theatre. That endeavor developed into a portion of the proceeds supporting a scholarship for the theatre’s Young Performers Program, a performing arts education program for youth ages 6-17, and support to bring in guest artists for some of the theatre’s special projects.

Act One was created as a unique way to unite The Ensemble Theatre’s growing community of young artists and professionals with an increasing interest in how they can contribute to sustaining the institution. They are recognized as the theatre’s next generation of leaders who support the theatre’s Annual Membership Campaign. They serve as volunteers and provide fundraising support. Achievements made since its inception include:

*Official approval as an auxiliary group by The Ensemble Theatre Board of Directors in September 2010.

*More than $100,000 impact in revenue and donations for The Ensemble Theatre

*Five annual installments of Drama-try: A Dramatic Night of Poetry

The Ensemble Theatre's 2015-2016 Season is sponsored in part by grants from the City of Houston through the Houston Arts Alliance, Texas Commission on the Arts, and the National Endowment for the Arts. United Airlines is the exclusive airline sponsor for The Ensemble Theatre.

The Ensemble Theatre was founded in 1976 by the late George Hawkins to preserve African American artistic expression and enlighten, entertain and enrich a diverse community. In addition to being the oldest and largest professional African-American theatre in the Southwest, it also holds the distinction of being one of the nation's largest African-American theatres that owns and operates its facility with an in-house production team.

The Ensemble Theatre produces a main stage season of contemporary and classic works devoted to the portrayal of the African American experience by local and national playwrights and artists. The theatre’s Performing Arts Education program provides educational workshops, Artist-in-Residence experiences and live performances for students both off-site and at the theatre; and the Young Performers Program offers intensive summer training for children ages six to 17 encompassing instruction in all disciplines of the theatre arts.