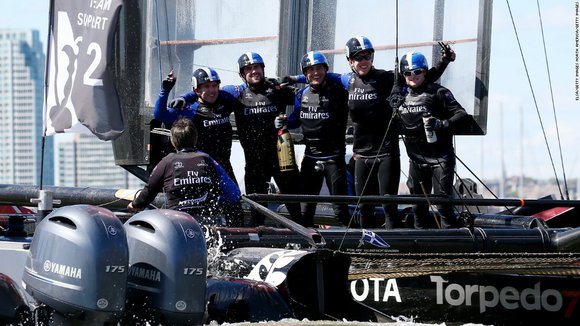 (CNN) -- From dead in the water to top of the America's Cup World Series standings, Emirates Team New Zealand overcame a troublesome start to steal victory in front of unprecedented New York crowds.

With their port hull punctured and their rudder unwittingly hooked to the starting buoy, crewman Blair Tuke had to jump into the fast-moving water just to get them going.

But a difficult beginning only made their eventual victory taste all the sweeter, as the triumphant team drank champagne before a New York skyline.

"It was one of those series where everyone had good luck and bad luck, but we got our good luck at the end of the regatta," reflected Emirates Team skipper Glenn Ashby. "It was exciting and crazy at the same time."

The elite sailing competition was returning to the Big Apple for the first time since 1920, and Sunday saw over 100,000 spectators lining the banks of the Hudson River.

Insufficient winds had forced organizers to curtail Saturday's action, but the final day of racing saw far more favorable, if variable conditions -- as onlookers were treated to a dramatic conclusion in conditions ranging from 5 to 20 knots.

Points accrued in New York count towards overall tallies going into the Louis Vuitton Challenger series, in which the winner will take on Oracle Team USA in the America's Cup held next year in Bermuda.

Up next, the series heads to Chicago, with the action taking place from June 10-12.