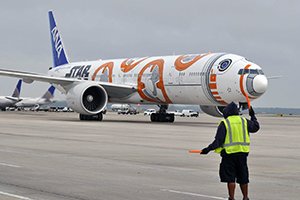 These ARE the droids you’re looking for, and they have landed at George Bush Intercontinental Airport (IAH).

The All Nippon Airways (ANA) “Star Wars”-themed Boeing 777-300 landed in Houston on April 14, 2016. The BB-8™ ANA JET is one of three ANA aircraft decorated with characters from the movie “Star Wars: The Force Awakens.”

“ANA passengers are getting a unique experience with the ‘Star Wars’-themed livery, and we appreciate the airline’s commitment to this market by selecting Houston as one of only a few destinations in the U.S. to welcome the out-of-this-world aircraft,” said Molly Waits, the Director of Air Service Development for the Houston Airport System. “The demand for nonstop air service between Houston and Asia is currently at unprecedented levels, and we look forward to a long partnership with ANA as opportunities for growth continue.”

Houston is one of only five destinations in the U.S. to welcome the special aircraft, which is scheduled to fly various international routes, principally routes linking Haneda, Narita in Japan and Houston, Los Angeles, New York, Chicago and Washington D.C. in the U.S.

The “Star Wars” franchise is one of the most iconic cinematic franchises of all time and a cultural phenomenon. Created by filmmaker George Lucas, the first film in the series was released in 1977. The series was an immediate commercial success having scored big at the box office as well as receiving many awards. The most recent installment — “Star Wars: The Force Awakens — was released in December 2015 and was the highest grossing movie in domestic box office history.

For more information go to http://www.fly2houston.com