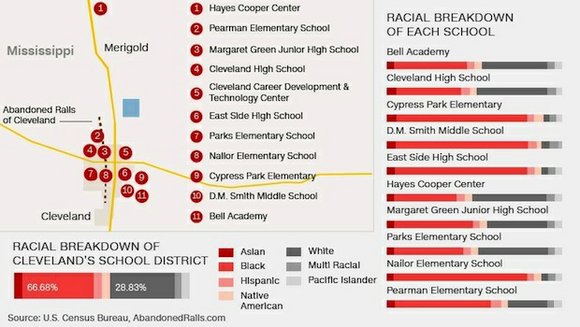 Residents of Bolivar County in Mississippi filed an action in 1965 claiming schools were segregated. n last week's ruling, a judge chose a federal plan for desegregation over a local one. CREIDT: US Census Bureau/Abandonedrails.com

(CNN) -- Living on the "other side of the tracks" isn't just a cheap idiom in Cleveland, Mississippi.

Court documents show that 62 years after the U.S. Supreme Court ruled school segregation unconstitutional, the schools in this west Mississippi town of 12,000 are still divided, black and white -- and the abandoned Illinois Central Railroad tracks that run through town serve as the line of demarcation.

"Half of Cleveland's schools -- the schools on the east side of the railroad tracks -- are all black or virtually all black. The majority of the schools on the west side of the railroad tracks, including Cleveland High School, Margaret Green Junior High School, and Parks Elementary School, enroll a student body that is at least 20% more white than the student population," read a Friday federal court opinion ordering the integration of the district's schools.

The case, which has been navigating the judicial system for more than 50 years, began when 131 minor children of Bolivar County, through their parents and guardians, filed an action claiming that what is now the Cleveland School District maintained a policy of operating schools "on a racially segregated basis."

"The delay in desegregation has deprived generations of students of the constitutionally guaranteed right of an integrated education," U.S. District Judge Debra M. Brown wrote in her decision.

"This failure, whether born of good faith, bad faith, or some combination of the two, has placed Cleveland in the unenviable position of operating under a desegregation order long after schools in bastions of segregation like Boston, Jackson, and Mobile have been declared unitary."

The Cleveland School District was none too pleased with the decision and issued a statement saying that it stood by its proposal for a "combined middle school with two racially balanced high schools," a plan the feds rejected. The board is considering its options for appeal.

To be fair, Cleveland is hardly the only locale with segregated schools. A recent report from UCLA's Civil Rights Project shows that the percentage of "intensely nonwhite schools" -- that is, those where fewer than one in 10 students is white -- are on the uptick, and it might surprise you where most of these schools are situated. More on that shortly.

Brown's decision involved competing plans to desegregate the schools, two put forward by the school district and another by the federal government.

The federally proposed plan, which calls for consolidating the district's high schools and middle schools at the beginning of the 2016-2017 academic year, was chosen.

Both parties were directed to give the court a proposed timeline to implement the federal plan within 21 days of the order.

"Six decades after the Supreme Court in Brown v. Board of Education declared that 'separate but equal has no place' in public schools, this decision serves as a reminder to districts that delaying desegregation obligations is both unacceptable and unconstitutional," said Vanita Gupta, the head of the Justice Department's civil rights division.