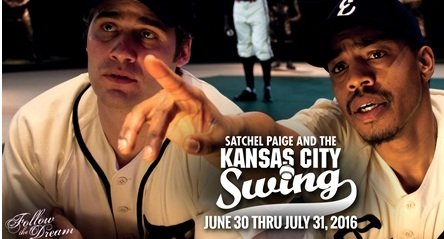 The Ensemble Theatre Kicks Off its 2015-2016 season finale with Satchel Paige and the Kansas City Swing written by Try Ellis and Ricardo Khan, Directed and choreographed by Patdro Harris, and Musical Direction with Original Songs by Carlton Leake.

Kansas City jazz filled nights awakened to cracks of baseball bats as change for Black Americans seemed enticingly close in 1947. Satchel Paige and many other all-stars flourished in Negro League Baseball, many of whom crossed color lines like Jackie Robinson who become the first Black player in modern major-league baseball. This story tells the triumphs and humanity of these players as business men and family men best described in Satchel Paige’s quote "Work like you don't need the money. Love like you've never been hurt. Dance like nobody's watching."

Where: The Ensemble Theatre

The Ensemble Theatre's 2015-2016 Season is sponsored in part by grants from the City of Houston through the Houston Arts Alliance, Texas Commission on the Arts, and the National Endowment for the Arts. United Airlines is the official airline sponsor for The Ensemble Theatre. Satchel Paige and the Kansas City Swing is generously underwritten by The Cullen Trust for the Performing Arts.

The Ensemble Theatre was founded in 1976 by the late George Hawkins to preserve African American artistic expression and to enlighten, entertain, and enrich a diverse community. Thirty-nine years later, the theatre has evolved from a touring company operating from the trunk of Mr. Hawkins’ car to being one of Houston’s finest historical cultural institutions.