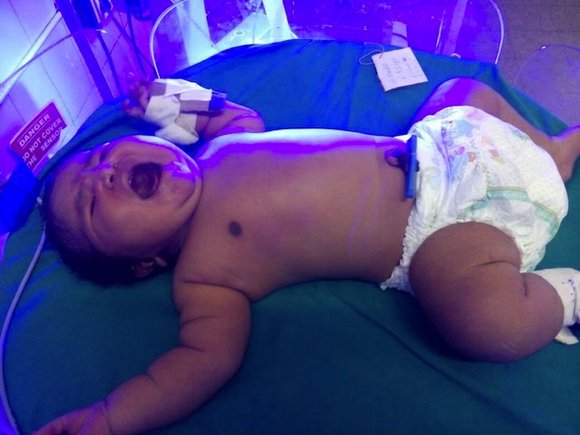 A woman in India has given birth to a 15-pound (6.82 kilogram) baby, which doctors believe is the country's heaviest newborn. Full Credit - Hassan Institute of Medical College

DELHI, India (CNN) -- A young woman in India has given birth to a 15-pound baby girl, which doctors believe is the country's heaviest newborn.

The 6.8-kilogram baby is the weight of an average four-month old, and was born by cesarean section Monday to a 19-year-old woman.

"I have been working for 10 years in this hospital, and (until now) the heaviest baby I have delivered is 4.5 kilos," said Poornima, who delivered the baby and wanted to be identified only by her first name.

"This is by far, the heaviest baby."

The hospital said the new parents were thrilled with their first child's safe arrival and happy to share images of the newborn.

Both mom and baby are doing well and have no complications, said Kumar, the doctor in charge of the newborn's care.

The mother was unable to breastfeed and the infant was drinking 50 ml (2 ounces) of milk every two hours, he added.

Her birth weight is twice that of most Indian babies, who usually weigh between 2.5 kilograms and 3.5 kilograms (5 pounds, 8 ounces and 7 pounds, 12 ounces) at birth, he said.

The baby was born at a hospital in Hassan, in the southern state of Karnataka.

While she's certainly heavy, India's bundle of joy does not come close to the heaviest baby ever born. That title goes to a boy born in Italy in 1955, according to the Guinness World Records.