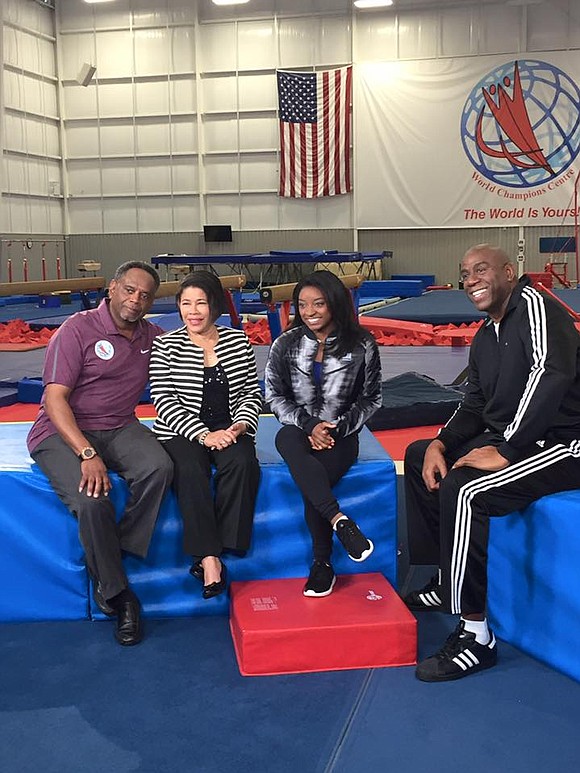 Magic Johnson sits down w/ #SimoneBiles & her parents during the next installment of Magic in the Making only on ASPiRE! #Tunein on 12/20 @ 8p/e! #MITM

(Black PR Wire) ATLANTA – November 28, 2016 – ASPiRE (@tvASPiRE), the network that presents authentic portrayals of Black and urban culture, announced today that Earvin “Magic” Johnson will sit down with Olympic Gold Medalist Simone Biles on the next installment of Magic in the Making. In Magic in the Making, the NBA legend and entrepreneur chats with prominent trailblazers and influencers in engaging, revealing and relaxed conversations. His guests share remarkable stories about their road to success and what they aspire to do next. In this special episode, Johnson will talk to Biles and her parents, Ron and Nellie Biles, at their family-owned gym in Houston, Texas, where they will delve into her upbringing, career and what inspires and motivates her. Magic in the Making will air Tuesday, Dec. 20 at 8 p.m. ET.

“It is with great pleasure to sit down with Simone and her parents on the next episode of Magic in the Making. The show allows me to have candid and heartfelt conversations with extraordinary individuals,” said Johnson. “Simone captivated the hearts and television screens of many Americans during this year’s Summer Olympics. I am excited to share her story of incredible heart and grand success that will be sure to entertain and inspire the ASPiRE audience to dream big.”

“We are thrilled to present this intimate and authentic conversation between two extraordinary athletes who continue to pave the way for others,” said Melissa Ingram, vice president and channel manager, ASPiRE. “Simone’s talent and competitive spirit is remarkable, and the love and support demonstrated by her parents should be commended and witnessed by all.”

Simone Biles is an Olympic Gold medalist in vault, floor, Individual and Team All-Around and a Bronze medalist on beam. In the 2016 Rio Olympics, she won the most medals in a single game. Among her other accomplishments, she’s the first woman gymnast to win three consecutive World All-Around titles and has the most World Championship gold medals (10) won by a female gymnast in history. Biles is the most decorated World Championship American gymnast with 14 total medals (10 gold, two silver, two bronze).

ASPiRE is the television entertainment network that presents authentic portrayals of Black and urban culture through stories of Heritage, Heart and Humor. ASPiRE offers a diverse programming mix of movies, series and specials featuring music, comedy, drama, faith/inspiration, theater/performing arts, lifestyle and news/information. The network was launched on June 27, 2012 by Magic Johnson Enterprises, which acts as a catalyst for driving unparalleled business results for its partners and fosters community/economic empowerment by making available high-quality entertainment, products and services that answer the demands of ethnically diverse urban communities. ASPiRE is available in 24 of the top 25 African-American markets including New York City, Los Angeles, Atlanta, Chicago and Washington, D.C.For more information, visit www.aspire.tv, facebook.com/aspireTV, @tvASPiRE on Twitter and @ASPiRETV on Instagram.