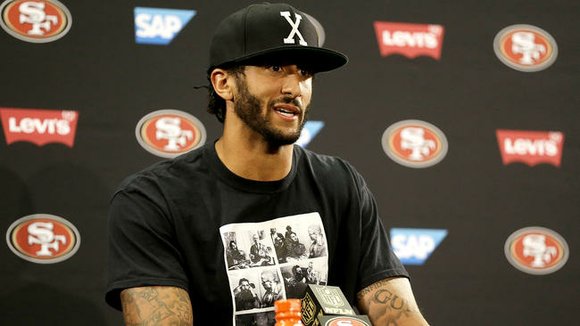 (CNN) -- San Francisco 49ers quarterback Colin Kaepernick was greeted with a chorus of boos Sunday when he took the field at Hard Rock Stadium in Miami Gardens, Florida.

It wasn't just because the 49ers were playing against the home-standing Miami Dolphins.

Miami is home to a large community of Cuban exiles and they are outraged over Kaepernick's comments supportive of the man they consider a brutal oppressor, the now-deceased Cuban leader Fidel Castro.

Kaepernick is used to being booed. He's been raising a streak of controversies ever since his August decision to sit in protest during the national anthem before an NFL preseason game.

After that game, he showed up at a news conference wearing a T-shirt depicting a meeting between Castro, who was alive then, and Malcolm X, the pioneering African-American leader and activist who was assassinated in 1965.

During an interview with Miami reporters on Wednesday, Kaepernick defended his choice to wear the T-shirt, according to Miami Herald columnist Armando Salguero's personal account.

Over a teleconference call, Kaepernick reportedly praised Castro for investing in Cuba's education system, as opposed to the American investment in the prison system, according to Salguero.

He spoke to reporters after the Dolphins 31-24 victory over the 49ers and expounded on his remarks, which he said were taken out of context..

"I would hope that everybody agrees those things are good things. And trying to push the false narrative that I was a supporter of the oppressive things that he did is just not true."

Kaepernick also received a lot of criticism earlier this month. He didn't vote in the recent election, saying it would be "hypocritical" of him to cast a ballot.

As for Sunday's game, it came down to the final play. Kaepernick had the ball in his hands but was stopped short of the goal line.

The 49ers' defeat was the 10th consecutive loss for the team, the worst losing streak in its history.