Hurricane Matthew: US Evacuations Begin Ahead of Storm 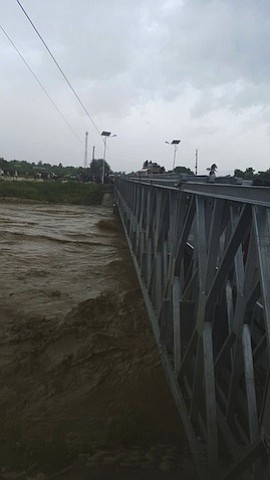 Hurricane Matthew's took its last lashes at Haiti, where it downed trees, drenched the ground with feet of rain and flooded streets. The damage was especially brutal in southern Haiti, where sustained winds of 130 mph continued to punish the impoverished island nation.

(CNN) -- Hurricane Matthew likely won't strike the US for another day -- but after seeing its devastating impact on Haiti, many are not taking chances.

They've raided stores for supplies, waited in seemingly endless gas station lines and evacuated their homes as the storm threatens much of the East Coast.

After its harsh winds and heavy rains assailed Caribbean nations, Hurricane Matthew continued early Wednesday its march toward the US. The deadly hurricane, which has sustained winds at 125 mph as it heads toward the Bahamas, has triggered a hurricane warning for parts of Florida -- and started to cause headaches elsewhere along the East Coast.

Forecasters predict it will be a Category 4 hurricane by the time it brushes up against the East Coast -- including Florida, Georgia, South Carolina, and North Carolina -- sometime between Thursday evening and Saturday.

The Hurricane Center said the storm could make landfall in any of those states. It also noted that long-range forecasting can be imprecise and cautioned each of those areas to be on guard.

"When a hurricane is forecast to take a track roughly parallel to a coastline, as Matthew is forecast to do ... it becomes very difficult to estimate impacts this far in advance," the hurricane center said.

State officials this week have warned residents and visitors of potential miserable times ahead. So far, Florida gas stations attendants have seen long lines, South Carolina motorists have endured heavy gridlock on highways and North Carolina tourists have been told to cut their vacations short.

Here are how Southern states are preparing for potential effects as Matthew moves north:

Earlier this week Florida Gov. Rick Scott declared a state of emergency for the entire state. In doing so, he warned that a direct hit by Matthew could lead to "massive destruction" on a level unseen since Hurricane Andrew devastated the Miami area in 1992.

The top priority, Scott said, would be to ensure that Florida did not add to Matthew's death toll, which has climbed to seven people by late Tuesday.

"We have to be prepared for a major hurricane," Scott said. "We have to prepare for a direct hit."

Scott advised Florida residents who live near the East Coast to leave before travel becomes difficult. He told reporters Tuesday that evacuation orders could be imminent.

Brevard County commissioners ordered one of the state's first mandatory evacuations for residents of Merritt Island and other barrier islands. Residents are being ordered to leave starting 3 p.m. Wednesday.