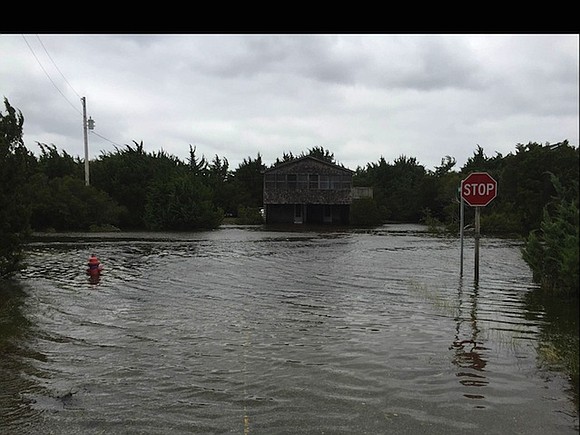 Flood waters begin to subside but still remains a threat in parts of North Carolina.

Ten people have died from the storm in North Carolina, Gov. Pat McCrory said Monday. That brings the US death toll from Matthew to 20.

McCrory said one of the most recent deaths was in Johnson County, where a car drove into flooded waters and was swept away.

"We have people on roofs as we speak," he said.

McCrory said the Federal Aviation Administration has ordered flight restrictions over the area so rescue helicopters can work.

Matthew's wrath is finally over, but what the storm left behind is causing widespread misery.

About 500,000 customers are still without power in North Carolina, where record-breaking flooding led to 1,000 emergency rescues over the weekend -- including some in chest-deep water.

And while storm victims in Florida, Georgia and South Carolina can start to clean up, rivers in North Carolina could top their banks during the next several days -- leading to further destruction.

State officials believe heavy rains -- aided by wind-driven storm surges of up to six feet -- could lead to flooding on a level unseen since Hurricane Floyd hit in 1999.

Rescuers have already saved 1,000 people across eastern North Carolina, including 701 in Cumberland County, authorities said. The Coast Guard deployed a helicopter to pluck eight people from rooftops in the town of Pinetops.

One of the cities hardest hit by the flooding was Fayetteville. Trees toppled throughout the city like broken matchsticks.

Not far from Fayetteville, Matthew's torrential rains caused dams to breach near Raleigh and Lumberton.

With the Tar River expected to crest at 35.8 feet, more than 15 feet above flood stage, authorities ordered a mandatory evacuation Sunday for parts of Greenville, Goldsboro, Princeville, Tarboro and other nearby towns.

A total of three people died in South Carolina due to Matthew.

"I'm going to ask for patience," Haley said. "Do not plan to go home."

In Savannah, Georgia, Sue Alice Walker, 85, awoke this weekend to find 3 inches of water flowing inside her home.

"First, I saw it in the living room, then in the kitchen, and then last it came in my son's room," she told CNN's Sara Ganim.

Over the weekend, Walker had to mop and shovel the water into buckets, hoping to salvage her house as the storm passed.

"The city of Savannah has already started to clean things up," Savannah resident Jordan Studdard told CNN. "This town has been hurt, but everyone is coming together to help."

Florida Gov. Rick Scott took an aerial tour of the Jacksonville area to survey the destruction.

He described the damage, including beach erosion and washed out roads, as "unbelievable." But he remained thankful the eye of the storm had stayed off Florida's coastline.

During the storm, raging waters made roadways look more like rivers in parts of Jacksonville and other coastal communities. Meteorologists noted that storm surge went higher than four feet in some areas.

Scott said 132,000 homes still had no power as of Sunday, though the cleanup was moving quickly.