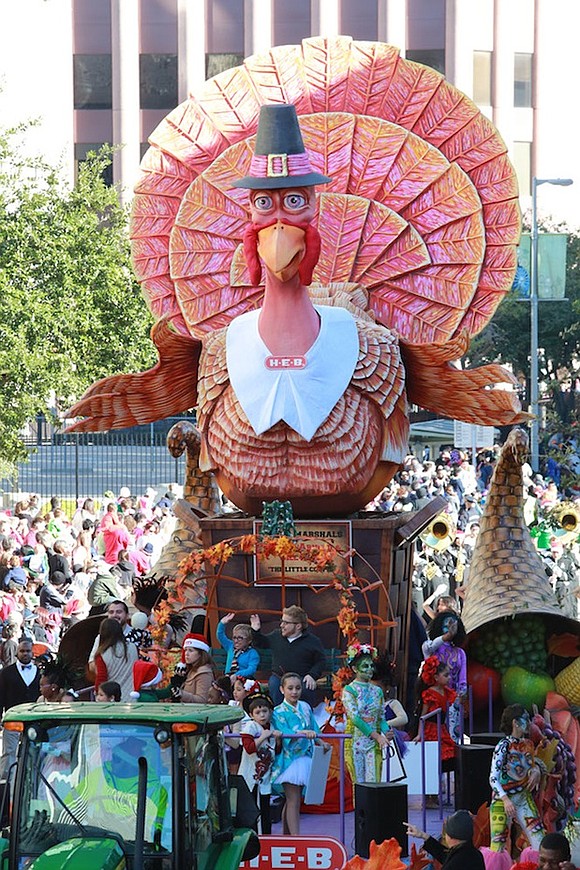 Mayor Sylvester Turner, along with grand marshals, Olympic Gold Medalists and Houstonians Simone Biles and Simone Manuel will kick off the 2016 holiday season with the 67th Annual H-E-B Thanksgiving Day Parade on Thursday, November 24th. This year’s parade celebrates Houston as a spirited global, American city, with a focus on family.

NEW FLOATS and HIGH-FLYING BALLOONS will glide through the route along with special appearances from Tom Turkey, Santa Claus, The Houston Children’s Choir, Greater Houston area Olympians, Metro Dance Company, the Apache Belles from Tyler, Texas, the Bulldog Band from Trenton, Missouri, and so much more! This year Houston will also kick off a new tradition, the “Mayor’s Citywide Sing-a-Long”, where parade viewers and participants will join together to sing “What The World Needs Now Is Love”.

“The H-E-B Thanksgiving Day Parade is a fantastic holiday tradition that we are thrilled to bring to Houstonians each year,” said Mayor Sylvester Turner. “We are extremely proud to have two amazing local athletes lead the parade this year and help us celebrate just how thankful we are to live in this great, diverse city.”

“H-E-B is proud to join Mayor Turner in celebrating Houston’s very best,” said Cyndy Garza Roberts, Public Affairs Director, H-E-B. “We, at H-E-B, have much to be thankful for and consider it our privilege to share our bounty – from filling holiday tables with the freshest and most flavorful foods available to supporting this much-loved Thanksgiving Day tradition with Houston families.

Houston’s inaugural Thanksgiving Day Parade began in 1949 when Santa arrived at Union Station and rode his sleigh to the downtown Foley’s department store. Today, the annual Holiday Parade is produced by the Mayor’s Office of Special Events and will begin on Smith at Lamar, north to Walker, east to Milam, south to Pease, west to Louisiana, north to Clay, west to Smith, and north to end at Smith and Dallas.

The 67th Annual H-E-B Thanksgiving Day Parade begins at 9 a.m., is free and open to the public. A limited amount of seats are available at the parade’s starting line, and can be purchased through the official website for $28 each including service fee. Curbside space along the route for lawn chairs and blankets will be plentiful. Arrive early to partake in the food truck offerings stationed throughout the route.

Easy access parking is available along the route, and Metro buses will be running on a holiday schedule. For route and schedule information, please visit Metro or call 713-635-4000.