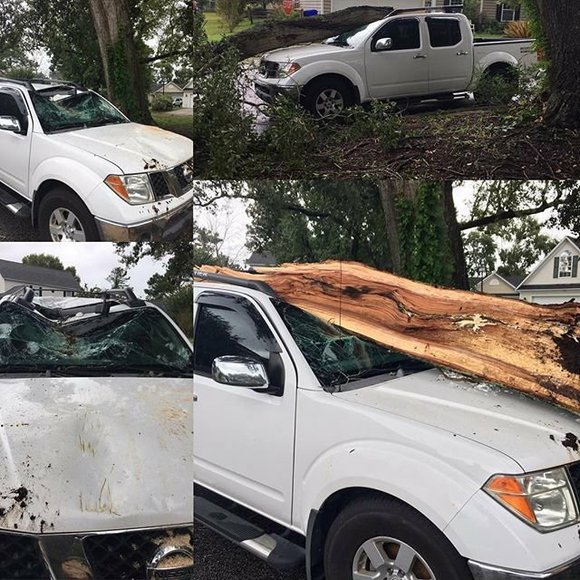 Hermine has left a trail of destruction in her path as the storm has traveled up the East coast. Anthony Kourmoulakis' truck was severely damaged in James Island, South Carolina, when a tree fell.

A tropical storm warning for New York City was canceled early Monday, but warnings remained in effect along the eastern coast of Long Island, as well as for Connecticut, Rhode Island and Massachusetts, including Cape Cod and the islands.

Hermine was expected to start weakening Monday night as it moved west-northwest at about 7 miles per hour, according to a National Hurricane Center update Monday at 5 pm ET.

On Monday afternoon the storm's center was about 200 miles southeast from the eastern tip of Long Island. Hermine will meander northward in the Atlantic on Tuesday and is on track to be off the New England coast by Wednesday.

Forecasters expect Hermine's maximum sustained winds to remain near hurricane strength -- at nearly 70 mph, with higher gusts -- extending up to 230 miles from its center.

The storm churned up waves that rocked the Royal Caribbean cruise ship Anthem of the Seas as it sailed through the edges of Hermine on Sunday on its way from New Jersey to Bermuda.

One passenger, New Jersey resident Derek Beidermann, said in a video his brother-in-law Robert McHugh tweeted out that beginning early morning Sunday, the ship started "swaying a bit" in the rough weather.

Beidermann estimated the winds measured "something like 90 knots" (103 mph) and ocean swells "got up to 40 or 50 feet at one point."

In the ship's restaurants, dishes were "going all over the place," Beidermann said.

Many passengers were feeling sick from the rough weather. "Half the ship is in the room right now over the toilet," Beidermann said.

In another tweet posted Monday, McHugh said that the seas were "much better this morning."

Royal Caribbean said in a statement Sunday the ship was continuing to sail "safely to Bermuda."

"Earlier today, our captain informed guests that we had experienced higher winds and gusts for a 2-3 hour period," the statement said.

Anthem of the Seas is no stranger to rough waters. Last February at least four people were hurt when the ship hit hurricane-force winds off North Carolina, prompting the crew to turn the vessel around and return to port in New Jersey.

Warnings from Fire Island to Nantucket

Stretches of the Northeast coastline specifically under the tropical storm warning Monday included Long Island from Fire Island Inlet to Port Jefferson Harbor and from New Haven, Connecticut, to Sagamore Beach, Block Island and Massachusetts, including the islands of Martha's Vineyard and Nantucket.

Officials warned about dangerous rip currents and high surf, which are possible through mid-week. There won't be much rainfall Monday and Tuesday -- totals will range from half an inch to 1.5 inches.

More than 34,000 without power in Florida Monday

Meanwhile, in Florida where Hermine first made landfall early Friday as a Category 1 hurricane, at least 34,361 customers remained without power as of 8 a.m. Monday, according to the Florida Division of Emergency Management.