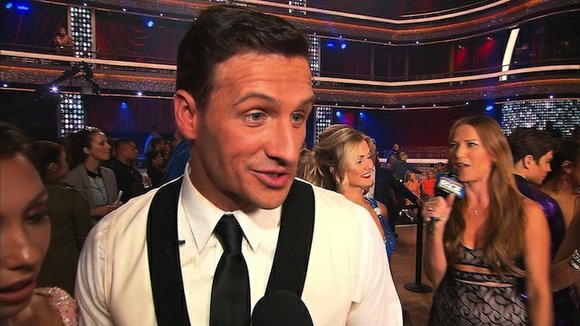 Protesters rushed the stage after Ryan Lochte's first performance on "Dancing with the Stars," interrupting the live show Monday evening. The incident occurred as Lochte was receiving one of the judge's critique of his dance routine.

By Madison Park and Sandra Gonzalez

(CNN) -- Protesters rushed the stage after swimmer Ryan Lochte's first performance on "Dancing with the Stars," interrupting the live show Monday evening. The incident occurred as Lochte was receiving one of the judge's critique of his dance routine.

"Two individuals stormed the dance floor tonight and were immediately subdued and escorted out of the building," a spokesperson for the company that produces "Dancing with the Stars," BBC Worldwide Productions, told CNN.

ABC News reported that two men got on the ballroom dance floor and at least four other people yelled anti-Lochte chants. CNN has confirmed that the two men were Barzeen Soroudi and Sam Sotoodeh. "They were arrested on trespassing, this was a private person's arrest as the security at the venue made the arrest," a spokesperson for the LAPD told CNN. "We just accepted [them] and booked them."

Lochte joined Season 23 of "Dancing With The Stars" after a spate of negative publicity he received for admitting he "over-exaggerated" claims that he and fellow swimmers were robbed at gunpoint in Rio de Janeiro.

Although the show was live, the actual incident was not shown on camera by ABC.

At least one audience member was able to record the moment security guards tackled Soroudi and Sotoodeh and post videos to social media.

Throughout the brief incident, the camera stayed focused on judge Carrie Ann Inaba, who yelled "Excuse me!" multiple times as clamor rose in the audience and onstage.

"Off! Off!" she yelled, gesturing for the intruders to get off stage.

The network went to a commercial break, but the camera briefly showed Lochte and his dancing partner, Cheryl Burke, as both appeared flustered and surprised.

"Dancing with the Stars" host Tom Bergeron addressed the interruption after the commercial break.

"We had to go to break because we had a little incident," he said, although he didn't clarify any further. Bergeron thanked the security team on the show.

He also asked Lochte how he was doing after the interruption.

"So many feelings are going through my head right now," said the Olympic swimmer. "I'm a little hurt."

After the show, Lochte told CNN that he was saddened by what happened.

"You know, at that moment, I was really heartbroken," he said. "My heart just sunk. It felt like somebody just ripped it apart."

But Lochte added he "had to brush it off."

"Completely shocked" but "beyond" proud of him

His dancing partner, Burke, said she was "completely shocked" but "beyond" proud of him.

CNN crews captured two suspected protesters outside of the event being led away in handcuffs. They both wore T-shirts that contained a red circle with a slash going through the word Lochte. One man called Lochte "a liar."