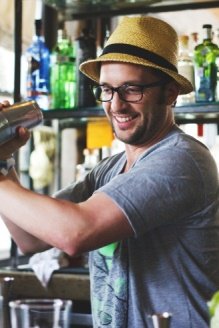 HOUSTON – September 11, 2016 – In a collaborative effort between the Mendieta family of Pearland’s Emma’s Mex Grill and Milagro Tequila, famous illustrator and street artist Beo Hake from Monterrey Mexico, has been commissioned to complete a mural that will encompass the art of tequila, the Mendieta family history and their ties to the Pearland community. A celebration for the mural unveiling will take place on Tuesday, September 20th from 6:30 p.m. to 9:00 p.m. Featuring Milagro handcrafted cocktails, an intimate dinner prepared by Jose Mendieta, Sr., and live music, the public is invited to attend for $45 per person (plus tax and gratuity). Emma’s Mex Grille is located at 5010 West Broadway Street, Pearland, TX 77581.

Milagro Tequila has a deep-rooted connection with art—from its founders’ original inspiration to the artistry of its liquid and its bottle design. The vision of Milagro started with founders, Daniel Schneeweiss and Moy Guindi, who embodied the creativity and self-expression of modern Mexico City, particularly its innovative architecture, art, music and design. The first step in bringing their dream to life was finding Pedro Juarez, the Master Distiller. Pedro’s vision started where the art of tequila begins – with the agave itself. He insisted on using only the remarkable Jalisco Highlands 100% estate-grown blue agave, which is sweet, fruity and aromatic, setting Milagro Tequila apart from other tequilas. The artistry came full circle with Milagro’s bottle design. The Select Barrel Reserve bottles are handmade, each crafted around a sculpture of the agave heart, and the brand’s logo, as featured on the brand’s Core line, was inspired by the organic forms of Mexico city street art.

Beo will begin work on the mural on Monday, September 19 and continue working through the reveal event. Within the design of the newly opened 7,000 square foot restaurant, the family dedicated a wall space directly above the kitchen for the special artwork.

Beo Hake, an award-winning illustrator and graffiti artist from Monterrey, Nuevo Leon, Mexico, is inspired by his daily experiences. The core of his style is an ethereal sense of daydreaming with recurring themes of animals and nature. He has worked with several magazines including PICNIC and Cut Magazine and participated in gallery exhibitions like “Puro Machin” curated in in the José María Velasco. He won the international Threadless Adventure Time T-shirt contest, third place at Imjusan mural contest in 2012, and has painted at numerous festivals.

Based in San Antonio, Juan Pablo (JP) De Loera is the William Grant & Sons Texas Brand Ambassador for Milagro. Starting in 2008, JP began learning about the world of tequila through agave growers, jimadores and master distillers. He has two tequila degrees; one by Cultura y Capacitacion de Tequila, and the second by tequila’s governing body, the CRT, along with the University of Guadalajara. His love of tequila led him to meet great UK, US and other top international bartenders and mixologists. Inspired by the talent of bartenders and the diversity of tequila in cocktails, JP opened a tequila and cocktail bar in Guadalajara, Jalisco. JP’s has trained distributors, consumers, f&b teams, aficionados, and top global bartenders across the world. His family, like Milagro Tequila, is from Tepatitlan, in the highlands of the state of Jalisco.