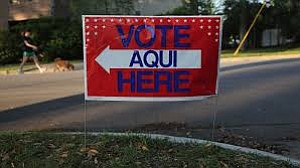 (CNN) -- A federal court judge ruled that a Texas voter ID law was passed with the intent to discriminate against minorities, violating the Voting Rights Act.

The state's voter ID law has been under legal challenge since it passed in 2011 and went into effect in 2013. The Texas law requires voters to present government-issued photo IDs such as a state driver's license, a Texas election identification certificate, a US passport or a military identification card.

Critics of the voter ID law say such requirements disenfranchise poor and minority voters, who face difficulties obtaining IDs. They also point out that while Texas accepts a license to carry a handgun as a permissible form of voter ID, it doesn't accept federal or state government IDs or a student ID.

"The terms of the bill were unduly strict," wrote Judge Nelva Gonzales Ramos for the US District Court for the Southern District of Texas. "Many categories of acceptable photo IDs permitted by other states were omitted from the Texas bill."

She also concluded in Monday's ruling that the law "had a discriminatory impact" and that there had been a "pattern of conduct unexplainable on grounds other than (the) race factor."

The Department of Justice during the Obama administration and other organizations had joined efforts to stop what they considered to be one of the strictest voting ID laws in the nation. But recently, the Justice Department reversed its course under President Donald Trump's administration and withdrew its claim in the case.

"We're disappointed and will seek review of this ruling at the appropriate time," said Marc Rylander, director of communications for Attorney General Ken Paxton

Advocates for voting rights and minorities applauded the judge's decision.

"There is no doubt that the court reached the right result," said Amy L. Rudd of Dechert LLP, pro bono counsel for the NAACP Texas State Conference and the Mexican American Legislative Caucus, in a statement. "We hope today's decision sends a strong message to the Texas legislature that any deliberate attempt to restrict Texas minority citizens' right to vote will not be tolerated."

The immediate effect of the ruling was unclear. The judge didn't specify what would happen next.

The Texas Secretary of State's website currently says voters must show one of seven forms of approved voter ID. If they don't have one of those, they may vote by signing a declaration at the polls explaining why not and provide supporting documentation, like a birth certificate or utility bill.

Richard Hasen, a law professor at the University of California-Irvine who writes a blog on election laws, posted Monday that the ruling has the potential of putting Texas back under restrictions of the Voting Rights Act.

If that happened, Texas might be required to seek federal approval before changing election laws.

"If (and it is a big if) the ruling stands through the 5th Circuit and Supreme Court appeals, it would be grounds for throwing out the entire law (and not just softening it though an affidavit requirement, etc.) and potentially a basis to put the state back under federal supervision for up to 10 years," Hasen wrote.

By deadlocking 4-4, the court left in place the ruling by a three-judge panel of the Fourth Circuit Court of Appeals that held provisions of the law targeted "African-Americans with almost surgical precision."

The law that was struck down had required a photo ID to vote, imposed restrictions on early voting days and eliminated same-day registration. Republican leaders in the North Carolina legislature complained the ruling was politically motivated.

Wisconsin's voter ID law has been in and out of court for several years.

Last November, a federal judge criticized the state government for not doing enough to inform the general public that "credentials valid for voting" would be issued to those who visit the DMV and initiate the ID petition process. But the judge did not strike down the voter ID law.

Ramos previously ruled on this case, known as Veasey v. Abbott, in 2014. In her prior ruling, she rejected the Texas law as "an unconstitutional poll tax."

The case made its way to the Fifth Circuit Court of Appeals, based in New Orleans, which reached a 9-6 opinion in July, finding similarly that it violated the Voting Rights Act. The appeals court sent the case back back to the district court to figure out whether the law was intended to discriminate.

Ramos said in her decision that the voter ID bill "was passed with a discriminatory purpose, despite its proponents' assertions that it was necessary to combat voter fraud."

Here is some of her reasoning:

She also described the way the bill was pushed through as "extraordinary," saying that it was done "without the usual committee analysis, debate, and substantive consideration of amendment." Ramos challenged the notion that the law existed to prevent voter fraud, questioning why it "did nothing to address mail-in balloting, which is much more vulnerable to fraud."

At the heart of the issue is a raging battle between Republicans who say they hope to fight voter fraud and Democrats who say the true aim of such photo ID requirements is to create a substantial burden on the right to vote, particularly for minority voters.