Altuve, Correa, Springer elected as starters while Keuchel and McCullers Jr. get in via player vote 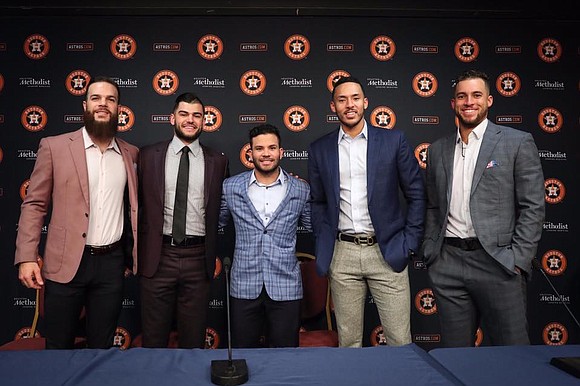 Altuve, Correa, Springer, Keuchel and McCullers Jr. were all named to the 2017 American League All-Star Team

HOUSTON, TX – Major League Baseball announced tonight that second baseman Jose Altuve, shortstop Carlos Correa, outfielder George Springer, left-handed pitcher Dallas Keuchel and right-handed pitcher Lance McCullers Jr. have been named to the 2017 American League All-Star Team. Altuve, Correa and Springer were elected to start the game via the fan vote at second base, shortstop and in the outfield, respectively. Keuchel and McCullers Jr. were named to the game via a combination of the Player Ballot and Major League Baseball’s Office of the Commissioner.

This marks the first time in club history that the Astros have three starters elected via the fan vote for a single All-Star Game. The Astros did have three starters in the 2004 All-Star Game at Minute Maid Park, but just one (2B Jeff Kent) was elected via the fan vote. CF Lance Berkman replaced an injured Ken Griffey Jr. and RHP Roger Clemens was the starting pitcher.

This also marks the second time in club history that the Astros have five All-Stars in a single season. In 1994, Jeff Bagwell, Craig Biggio, Ken Caminiti, Doug Drabek and John Hudek were all National League All-Stars.

Springer has elevated his game to another level in 2017 after an All-Star worthy 2016. The 27-year-old has hit 24 home runs, tied for the second-most in the Majors, including a Major League-best and single-season franchise-record nine leadoff home runs. Springer’s nine leadoff homers are the most by an AL player since Alfonso Soriano set a Major League record with 13 in 2003. The center fielder has batted .287 this season, and entered the day ranking among the top five AL players in runs (2nd, 63), total bases (3rd, 175) and OPS (4th, .936).

Keuchel, 29, has been virtually unhittable this season in what has been a return to the elite level of performance he showed during his 2015 AL Cy Young-winning campaign. In 11 starts, Keuchel has gone 9-0 with a 1.67 ERA (14ER/75.2IP), 69 strikeouts and a .183 opponent batting average (48x262). The Astros have gone 10-1 in his 11 starts, while his nine-game winning streak is the longest active streak in the American League. This season, Keuchel joined RHP Roger Clemens (2004) as the only pitchers in club history to start a season with a 9-0 record. In April, he took home his fourth-career monthly award when he was named the AL Pitcher of the Month after leading the Majors in wins (5) while posting a 1.21 ERA.

The 88th MLB All-Star Game will be played on Tuesday, July 11 at Marlins Park in Miami, Fla.