Donald Trump's John Podesta Tweet Has So, So Many Things Wrong With It 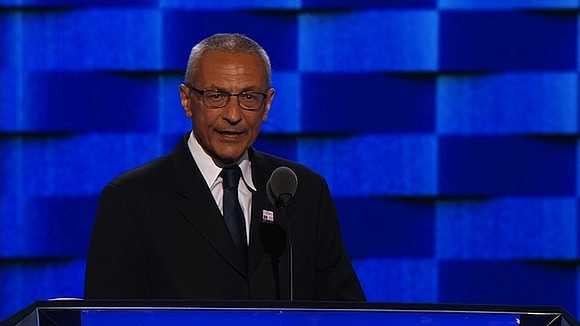 (CNN) -- Before heading into a consequential day of meetings with world leaders at the G20 summit in Hamburg, Germany, President Donald Trump took to Twitter to offer his thoughts about -- wait for it! -- the 2016 election.

Here's Trump's tweet: "Everyone here is talking about why John Podesta refused to give the DNC server to the FBI and the CIA. Disgraceful!"

Let's put aside the fact that Trump was tweeting about this hours before a hugely important sit-down with Russian President Vladimir Putin that could shape relations between the two countries for years to come. Or that less than 24 hours before this tweet, Trump was insisting that it's not entirely clear that Russia was the prime mover in the 2016 election meddling.

First, "everyone" at the G20 was talking about John Podesta? Really?

This is a global summit of world leaders. North Korea continues to pursue their nuclear ambitions. The situation in Syria remains intractable. The threat from ISIS remains. Questions of migration have roiled politics all over Europe. Climate change remains top of mind. Ditto trade.

Given the depth and breadth of those issues, count me skeptical that, say, newly elected French president Emmanuel Macron is talking to anyone he can find about Hillary Clinton's campaign chairman and his emails. Or German chancellor Angela Merkel. Or Italian Prime Minister Paolo Gentiloni. Or, to be candid, anyone not named Donald Trump.

Podesta wouldn't have the DNC server to turn over. You can't refuse to turn something in that you never had in the first place.

In a 7-tweet response to Trump's allegations, Podesta noted: "BTW, I had nothing to do with the DNC." In an interview last month with Fox Business' Maria Bartiromo, Podesta said of the DNC's refusal to turn over its server to the FBI "that was a matter for the DNC" adding: "If anything, it's on the FBI that didn't come forward and really inform the DNC about what was going on until long after."

Third, the FBI is the organization to which these servers would be turned over. Not the CIA. The FBI was leading an investigation into Russian meddling into the election, not the CIA.

In just 115 characters then, Trump said three things that weren't true or accurate. That's one inaccuracy every 38 characters.