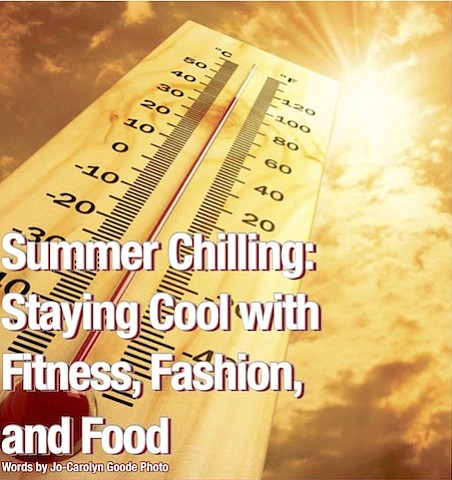 Falling down your face. Stinging your eyes. Wetting up your clothes. It’s sweating season ladies and gentlemen. Scorching, summery triple digit temperatures are in our imminent future when summer officially beginning on June 20th. The heat and humidity are already getting to some of us just taking a few steps out the door. Get prepared for the pending hotter days with tips on staying cool with fitness, fashion, and food.

Texans know heat better than anyone about record breaking heat. To date, the hottest temps on record for Texas occurred on June 28, 1994, when Seymour, Texas was 120 degrees Fahrenheit according to the National Weather Service. The hottest temps on record for June in Houston was 109 degrees on September 4, 2000, and August 27, 2011. Who knows what Sumer 2017 will have in store for us? That’s why we must be prepared.

In order to know how to stay cool, one must understand how the body gets heated. The first place to get answers is to speak with the folks at the Houston Health Department. Heat exhaustion occurs usually when doing heavy activity outdoors in the beaming hot sun. The body responds to this activity by shedding heat through the evaporation of water from the skin, sweat. This process also depletes the body of salt. Signs and symptoms of heat exhaustion quickly follow if not treated immediately. When the body temp rises above 103°F some signs that a person may be in trouble are red, hot and dry skin, rapid pulse, throbbing headache, dizziness, nausea, confusion, and unconsciousness. However, if the body’s sweat system fails and the body is unable to cool down a more serious condition could develop.

Before the point of panic, Porfirio Villarreal, Public Information Officer, offers a bit of advice to stay summer chill in Houston. His first tip is to hydrate. He advises that people should increase their water consumption and avoid caffeine, alcohol, and limit their sugar intake. Drinking liquids before, during and after physical activity in the heat will keep the body hydrated. Drinks with added sugars will give the opposite effect.

Summer chilling happens when one dresses in lighter loose fitting clothing but how can this be accomplished and still keep your fashionista cred? Shop at Macy’s, of course. Macy’s has a line of clothing that has been specially treated to provide protection from the sun. Macy’s UPF clothes give protection from the sun with a sense of style. Some clothes have sun protection factor of 50 allowing the body to stay cool by wicking away moisture and allowing freedom of movement. The clothing is lightweight and made with breathable fabrics.

Macy’s has plenty of lines to keep you protected from the sun’s UV rays. Dri-fit technology in Nike Sportswear protects the skin from the sun and controls sweat to avoid discomfort. Columbia Outdoor Clothing is light enough to go anywhere with a UV protectant and some items are even waterproof. Izod and PGA Tour SunFlux are golf inspired lines that can be dressed up or down that are coated with UPF protection and uses airflux technology to keep one calm, cool and collected while playing.

Drinking water and other fluids are not the only ways to stay hydrated this summer. A rule of thumb is to sip half your body weight in ounces. There are plenty of water-rich foods that cool temps and have additional benefits. Active.com highlights a few of them:

*Melons – These brightly colored fruits are made up of 90% water and replace glycogen quickly. Glycogen is an energy source for the body that is needed by cells especially when exercising.

*Berries – Not only are these burst of flavor rich with anthocyanins to reduce inflammation they also contain about 92% water.

*Soup – It is not just for the warmer months. Cool soup has salt and helps to replace electrolytes lost when sweating.

*Grains – When they are cooked, they soak up water, which the body absorbs in digestion.

*Sweet Peppers –Packed with vitamins C and A, peppers are made up of 92% water.

*Lettuce – Holding the highest percentage of water at 96% is lettuce. It is nutritious and aqueous.

*Cucumber – Just as high as the previously mentioned foods, cucumbers have a high water percentage and promote elasticity in joints, skin, and fingernails.

*Celery – This low-calorie vegetable has a water content of 95% and helps with calorie management.

Armed with information on the three F’s to stay summer chilling here are few bonus tips from the Houston Health Department:

*Take frequent breaks to hydrate yourself in the sun and restore your energy.

*Be a good citizen and check on neighbors that are elderly, have chronic health conditions, are overweight, and/or children under four-years-old. These people are the most susceptible to heat exhaustion and stroke.

The city of Houston is doing everything it can to protect citizens including giving them a place to cool down if there is no A/C in the home. During regularly business hours Monday-Friday from 8am-5pm people can visit the many multi-service centers to beat the heat for free. Other options include other public places like the mall and library. Visit houstontx.gov for more information.

Villarreal hopes citizens do everything they can to stay cool this summer especially since the deaths associated with heat exhaustion and stroke are going down. In 2015, city records reflect the death of four people from heat exhaustion and in 2016 the city recorded three deaths. They are hoping they won't have to record any heat related deaths for 2017. “We all need to take responsibility to keep that from happening,” added Villarreal.

Remember the rules of fitness, fashion, and food to stay summer chilling in 2017. Be cool Houston!