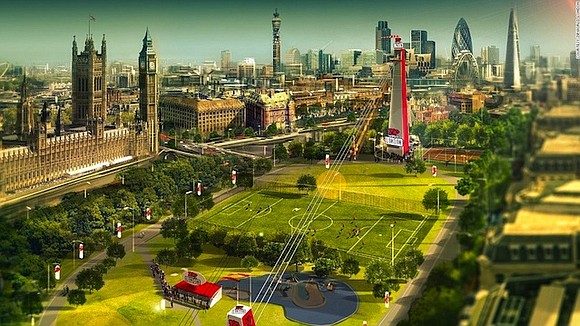 (CNN) -- London thrill-seekers will soon be able to see the city's famous skyline from a whole new angle -- thanks to a new zip line opening in July.

The concept is the brainchild of Zip World -- a Welsh adventure company now branching out to the capital.

London's new urban zip wire is described as the "biggest, fastest of its kind."

Riders will be treated to a panoramic, 360-degree perspective on London, glimpsing iconic monuments from Big Ben to The Shard.

The zip line will begin its flight at Archbishop's Park, a large green expanse south of the River Thames, close to the Houses of Parliament and Westminster.

"Giant zip lines and the greatest cityscape in the world -- it seemed such an obvious idea to put the two together," says Barry Shaverin, founder of Zip World London.

"And Archbishop's Park is one of London's best kept secrets -- we really want to help it get the attention it deserves."

In December 2016, a zip line across the Thames was installed by the London Fire Brigade.

Want to fly through the air elsewhere? Here are some of the coolest zip lines across the globe:

Zip World has three Welsh outposts -- all of which are worth a visit.

Penrhyn Quarry is home to Velocity -- the longest zip line in Europe.

Meanwhile, Zip World Slate Caverns has Titan -- which allows groups of four to zip together over the Welsh countryside.

In coastal Alaska, adventurers can enjoy the zip wire at Icy Strait Point.

England's longest and fastest zip wire is located at the Eden Project in Cornwall, a popular visitor attraction in southwest England.

Thrill-seekers plummet across Cornwall at 50 mph.

ZipOhio at Hocking Hills Canopy Tours launches two wires at a time from the midst of the tree canopy.

Riders then swoop down towards the Hocking River.

Hocking Hill also offers an "X-Tour" -- a 2.5 to 3 hour, professionally guided tour, across the river and through caves.

Zipflyer Nepal is the world's steepest zip line -- with an elevation drop of 600 meters (2000 feet.)

Nepal's wire is not for the faint-hearted -- it also claims to be the world's fastest and longest.

For those who can brave the drop, ZipFlyer Nepal also offers stunning views across forest canopies.

Riders are rewarded with spectacular bird's-eye views of the forest below.