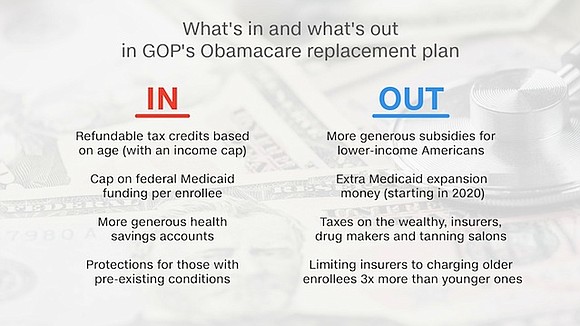 House Republican leaders are under fire for unveiling a plan that repeals major portions of Obamacare and replaces it with what some critics are calling "Obamacare Lite."

WASHINGTON (CNN) -- The House Ways and Means Committee needed 18 hours to become the first panel to approve the Republicans' Obamacare repeal bill, nearly a full day after debate began and with no end in sight.

Meanwhile Democrats in another committee are continuing to use as many procedural tactics as they can to delay the plan's advancement.

White House and Republican congressional leaders had sought to fast-track the legislation through Congress. Democrats have made clear it wouldn't be easy -- dragging out a the grueling debate in the House Energy and Commerce Committee well into the next day.

In both committee rooms, GOP lawmakers dismissed questions about the bill's cost and claims it would result in millions of Americans losing insurance coverage. Democrats mixed assaults on the legislation with diversionary tactics meant to embarrass Trump -- such as highlighting his refusal to release his tax returns.

The action on Capitol Hill comes against a backdrop of pitched controversy over the legislation, which is posing a crucial first test to Trump's capacity to move his agenda through Congress and as conservative Republicans complain that the initiative does not go far enough in erasing Barack Obama's signature domestic achievement.

Opposition to the Republican health care bill had strengthened Wednesday, as key industry groups that had supported Obamacare said the replacement backed by President Donald Trump could harm vulnerable Americans.

The American Medical Association, which bills itself as the largest organization of doctors in the nation, sent a letter to the two committees, detailing its critique of the bill, known as the American Health Care Act.

"While we agree that there are problems with the ACA that must be addressed, we cannot support the AHCA as drafted because of the expected decline in health insurance coverage and the potential harm it would cause to vulnerable patient populations," the letter stated.

Major hospital organizations, including the American Hospital Association and the Federation of American hospitals have also come out against the bill. The largest seniors organization, the AARP had warned on Tuesday the measure would weaken Medicare and Medicaid. Some conservative medical lobby groups have supported the measure.

"We would love to have every group on board," Spicer said, adding, "This isn't about figuring out how many special interests in Washington we can get paid off. It's about making sure that patients get the best deal, that lowers prices and brings back cost."

Trump also showed willingness to jump into the fray, meeting with the leaders of conservative groups that have lined up against the bill.

"This is going to be great. You're going to make it even greater," the President told the group, sources at the White House meeting told CNN. "I'm going to work hard to get it done."

But should the bill eventually fail, Trump outlined a backup plan: Allow Obamcare to fail and let Democrats take the blame, sources said.