'All hands on deck' for GOP, Trump as Health Care Vote Approaches 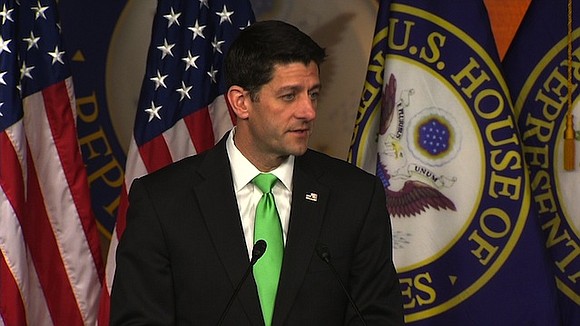 WASHINGTON (CNN) -- President Donald Trump warned his fellow Republicans of big losses at the ballot box if they fail to repeal and replace Obamacare.

Wednesday and Thursday, we'll learn if House Republicans heed that message and back legislation that has already tested the President's political prowess and has Trump and House Speaker Paul Ryan furiously counting every available vote.

"This is an all-hands-on deck situation," a senior House GOP aide said Tuesday.

According to CNN's ongoing whip count as of Wednesday morning, 21 House Republicans have flat-out said they will vote against the bill to repeal or replace Obamacare, while five more have indicated they are likely to oppose it.

Trump and Ryan must get 216 Republicans on board and can afford only 21 defections, if no Democrat joins them.

Trump has filled his schedule with back-to-back meetings with GOP lawmakers in recent days, and will continue the behind-the-scenes lobbying on Wednesday along with Vice President Mike Pence and Health and Human Services Secretary Tom Price.

Meanwhile, Ryan's whip operation is in full blitz mode. The House speaker has been texting with Freedom Caucus Chairman Mark Meadows, who has not budged. House Whip Steve Scalise and Deputy Whip Patrick McHenry have also been singling out individual Freedom Caucus members to try to peel them away from the group.

Various lawmakers who are planning to vote "no" have described to CNN having 30-45 minute phone calls with Trump officials in the past 36 hours.

Trump once again publicly pressed the importance of getting the health care bill through the House this week in a speech Tuesday night.

"The American people gave us clear instructions. It's time to get busy, get to work and get the job done," Trump said at a dinner hosted by the National Republican Congressional Committee. "That legislative effort begins with Thursday's crucial vote and it really is a crucial vote for the Republican Party and for the people of the country."

Wednesday morning will bring the last official procedural stepping stone before the bill heads to the House floor -- the Rules Committee, a panel traditionally full of leadership loyalists, which should clear the way to consider amendments to the measure and set up Thursday's dramatic vote.

That's an important step, but it's the arm-twisting that happens in closed-door meetings that will the difference.

Still stubbornly opposed to the health care proposal are members of the conservative Freedom Caucus, who insist they have more than 21 "no" votes to sink the bill. According to a source, the caucus' members have been invited to visit the White House in small groups in recent days -- an effort by administration officials to start peeling off members. That visit is likely to continue Wednesday, the source said.

Reservations about the bill span the party's political spectrum.

Trump met with some members of the moderate Republican "Tuesday Group" on Tuesday, and for one of those members, face time with the president wasn't enough to sway him.