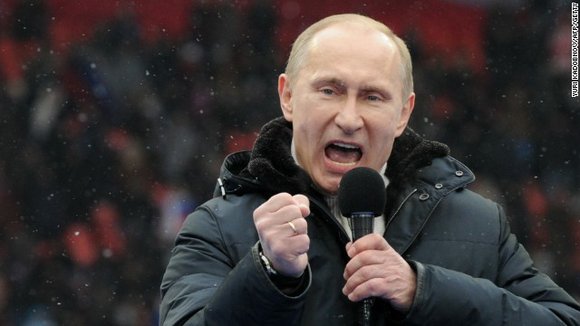 Russian President Vladimir Putin signed off on a new law that bans swearing at arts, cultural and entertainment events in the country.

WASHINGTON (CNN) -- President Donald Trump on Tuesday will speak with Russian President Vladimir Putin by phone, the first call between the two leaders since the US launched a missile strike against a Syrian regime air base last month.

The phone call will be the third between the two leaders since Trump took office in January and comes as relations between the US and Russia have once again soured despite Trump's expressed desire to improve ties between the two countries.

Russia condemned the US attack on a Syrian air base last month and briefly suspended a line of communication with the US military set up to avoid collisions between the two countries' air forces over Syrian air space. The Russian government has also refused to accept the international consensus that Syria carried out a chemical attack on its own civilians -- which prompted the US strike.

Trump's decision to hit the Syrian regime -- the first time the US did so in the six-year Syrian civil war -- flew in the face of his stated aversion to taking action against Syrian President Bashar al-Assad and his desire to partner with Russia to jointly target ISIS.

Tuesday's call was preceded by a visit Secretary of State Rex Tillerson paid to Moscow in the wake of that strike, which included a nearly two-hour meeting between the US diplomat and Putin.

The call also comes nearly a month after Trump declared that the US relationship with Russia "may be at an all-time low" during a news conference with NATO Secretary General Jens Stoltenberg at the White House.

"Right now, we're not getting along with Russia at all. We may be at an all-time low," Trump said.

The US has expressed suspicions that the Russian government was aware of the Syrian regime's plans to launch a chemical weapons attack, though the Trump administration has stopped short of leveling that allegation.

"I would like to think that they didn't know, but certainly they could have, they were there," Trump said during the news conference, a reference to the Russian presence at the Syrian air base, from which the US believes Syria launched the chemical weapons attack.

Still, Trump has continued to express his desire for warmer relations with Russia, albeit acknowledging that circumstances make the chance of improved relations much slimmer.

In an interview this weekend, Trump once again refused to lay the blame on hacking during the 2016 presidential election on Russia despite an overwhelming consensus by US law enforcement and intelligence agencies. Trump reiterated that the hacking could have been carried out by any country.

Trump and Putin have a host of other issues to address as well.

The conflict in Ukraine, where Russia has backed separatists, continues unresolved and the US has not lifted sanctions on Russia for its role in that conflict and its annexation of Crimea.

Trump has also redoubled US efforts to ramp up pressure on North Korea as the country's regime has aggressively sought to advance its nuclear weapons and ballistic missile programs, seeking to build an international alliance to rein in Pyonyang's ambitions.