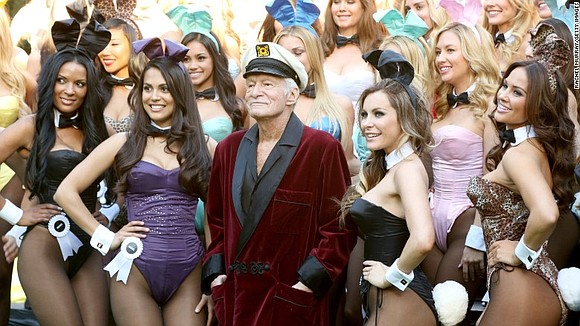 Playboy was an immediate success, selling more than 50,000 copies.

Hefner helped personally select monthly "Playmates," persuaded famous sex symbols such as Jayne Mansfield and Ursula Andress to pose nude for the magazine and added "centerfold" to the popular lexicon. He was also arrested in 1963 on charges that Playboy violated obscenity laws, but a jury acquitted him after a trial.

"I've never thought of Playboy, quite frankly, as a sex magazine," he told CNN. "I always thought of it as a lifestyle magazine in which sex was one important ingredient."

But its portrayal of women also drew a backlash.

In one memorable exchange, two members of the Women's Liberation Movement confronted Hefner on "The Dick Cavett Show." Activist Susan Brownmiller called him her "enemy" and later corrected him when he referred to both women as "girls."

"You should stop that," she said to applause.

Hefner always maintained that Playboy was about celebrating sexuality.

"I think that women, in the best sense, and not in a negative sense, are objects of desire," he told Larry King in 2010. "That is a celebration of one's own sexuality and the fact that we are two sexes. And what Playboy tried to (do) is to elevate it to another kind of level that did celebrate that."

But the magazine wasn't just about sex. Playboy published articles and short fiction by some of the most celebrated writers of the day -- including Ian Fleming, John Updike and Vladimir Nabokov -- inadvertently creating a joke phrase, "I only read Playboy for the articles."

"I knew I could do the other half of what I'm really all about, which is social justice," Hefner told King. "It wasn't simply race. It had to do with sexual prejudice and it had to do with drug prejudice."

Jimmy Carter made headlines after granting Playboy an interview during his 1976 campaign for president.

"I have looked on a lot of women with lust," Carter told the magazine, startling many readers. "I've committed adultery in my heart many times. God recognizes I will do this and forgives me."

As Playboy flourished in the '60s and '70s, Hefner steadily expanded his brand. Wearing a tux and brandishing a pipe, he hosted TV shows -- "Playboy's Penthouse" and "Playboy After Dark" -- that featured him chatting up entertainers in a swinging, bachelor-party setting.

In 1960, he launched a chain of exclusive Playboy Clubs in cities across the U.S. and overseas. And in 1971, he bought the now famous Playboy Mansion in Los Angeles, which soon became Hefner's home and attracted celebrities to its lavish all-night parties.

Decline of an empire

Playboy went public in 1971, the same year the magazine's monthly circulation peaked at 7 million issues. But Hefner's empire soon found itself grasping to define its role in a post-sexual revolution, post-feminist world. Raunchier men's magazines such as Penthouse and Hustler siphoned off readers. By the 1980s, the Playboy franchise had lost much of its popularity.