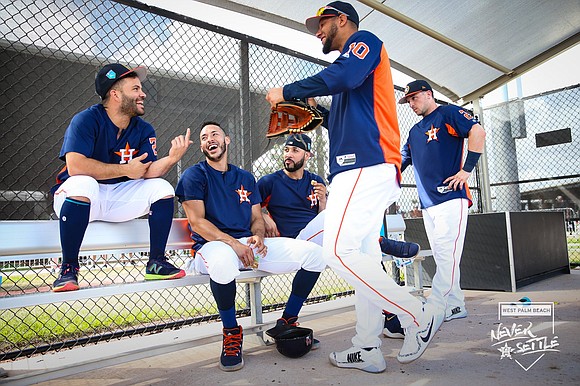 Prior to Wednesday’s 7:10 p.m. CT matchup vs. the Orioles, members of the Astros 2017 World Championship team will receive their Championship Rings during a special pregame ceremony presented by Jostens. MLB Commissioner Rob Manfred, Astros Owner and Chairman Jim Crane, Astros GM Jeff Luhnow and Astros President of Business Operations Reid Ryan will be on-hand to present each player with his Championship Ring. Additionally, more than 30 winners of a special Astros social media contest will present the 2017 Astros Championship Banner on the field during the pregame ceremony.

Former Astros outfielder Carlos Beltrán will return to receive his 2017 World Championship Ring and throw out the ceremonial first pitch prior to Tuesday’s contest.

Tuesday is also the first $1 Hot Dog Night presented by Nolan Ryan Beef of the season! Fans can purchase an unlimited number of Nolan Ryan Beef hot dogs at $1 each while supplies last (limit of four per person per concession visit).

The Astros wrap up their Opening Series vs. the Baltimore Orioles on Wednesday in what will be the first home day game of the season.

Astros Championship Weekend presented by Coca-Cola kicks off on Friday with a Replica World Series Trophy giveaway for 10,000 fans before the Astros take on the San Diego Padres at 7:10 p.m. CT. Fans are encouraged to arrive at the ballpark early to receive any promotional giveaways, as supplies are limited and not guaranteed. However, fans will not be allowed to line up for giveaways prior to 8:00 a.m. on any giveaway day this season.

To cap off Big and Bright Friday Night, fans are invited to stay after the game for Friday Night Fireworks, presented by Occidental Petroleum. This Friday’s fireworks theme is Champions, featuring live calls from the 2017 postseason and champion-inspired music. Upon conclusion of Friday’s game and prior to the start of Friday Night Fireworks, fans will be asked to move from the following sections for their safety and enjoyment: Home Run Alley, Escalator Tower Stairs in Center Field, Budweiser Brew House Tiers, Budweiser Batter’s Eye Bar, Torchy’s Deck, Crawford Boxes and sections 100-109, 205-208, 305-309, and 405-409.