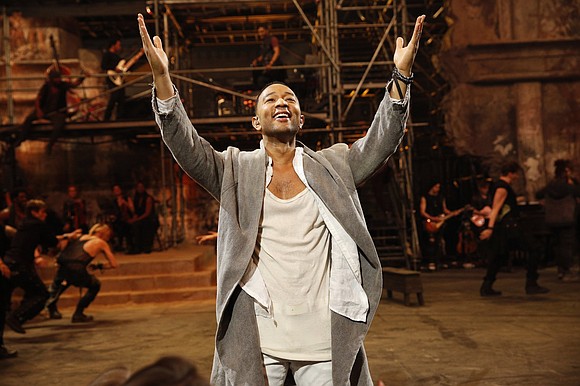 John Legend starred as Jesus and his wife, Chrissy Teigen, supported him on Twitter./Getty Image

(CNN) -- Oh Lord, was there anything better than Chrissy Teigen tweeting during "Jesus Christ Superstar Live in Concert"?

The model/TV personality had good reason to watch as her husband, John Legend, had the starring role in the live NBC musical.

Teigen is known for her often sassy and hilarious tweets and she did not let fans down Sunday night.

Just prior to the show beginning she tweeted, "It's almost time!!!" with a video showing a "shrine" built to her husband which included a candle with Legend's picture in place of Jesus, flowers and a sign which read "Good Luck."

Teigen, who is pregnant with the couple's second child, is seen with Legend and their almost 2-year-old daughter, Luna, as Kanye West's hit "Jesus Walks" plays.

She also joked that she couldn't "wait to learn about Jesus and superstars!!!!"

The "Lip Sync Battle" star seemed not to be too familiar with the plot of the musical which debuted on the stage in 1971 and chronicles the last week of Jesus' life.

"I have no idea what's going on I'm assuming these people are bad because coats," she tweeted.

Teigen also noted the show's fashion, tweeting "I have a feeling whoever has the deepest V will be crucified" and "THE V'S. THEY ARE A'DEEPENING."

There was even some love for Legend's costar, singer Sara Bareilles, who portrayed Mary Magdalene and had a big moment with the song "I Don't Know How to Love Him."

"Sara's voice is so pure," Teigen tweeted. "She makes singing seem so easy."

"Yes the shop specializes in coverups that aren't 32 million dollars," Teigen tweeted back referencing a settlement O'Reilly paid to a Fox News colleague who threatened to sue him for alleged sexual misconduct.

The proud wife tweeted video of Legend and the cast taking a bow.

We are still waiting for Teigen to tweet what she knows about #WhoBit Beyonce.