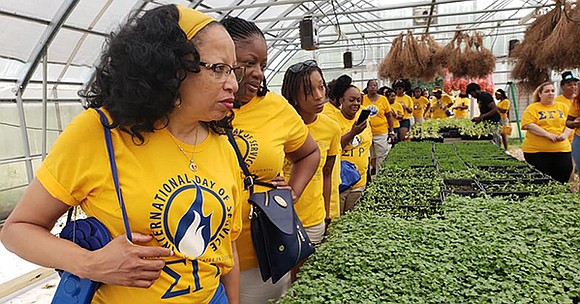 Cary, NC — With less than four years to go until its centennial celebration, Sigma Gamma Rho Sorority is focused on accelerating and expanding its community service impact across the country. During its 57th biennial convention in Dallas, which was held from July 11 to 15, the African American sorority shattered previous attendance records. Members participated in three community service projects and attended more than 16 different workshops and activities while delegates focused on the future during the sorority’s business meetings. A record-breaking $88,000 was donated to six charities during the convention.

“I could not be prouder of our sisterhood,” recalls Deborah Catchings-Smith, newly re-elected international president of Sigma Gamma Rho Sorority. “During our last fiscal year ending June 30, our college and alumnae members logged more than 144,000 community service hours and we contributed $500,000 to our charitable partners. The success of the Dallas convention is proof that our organization is gaining momentum and that the work we do is relevant and impactful.”

While in Dallas, members and affiliates spent several hours at Paul Quinn College’s We Over Me Organic Community Farm, planting seeds and touring the former football field that provides fresh produce to their food desert community. Catchings-Smith presented Paul Quinn College President Michael Sorrell with a check for $22,000, an amount representing the sorority’s founding in 1922.

Donations were also made to long-time partners St. Jude Children’s Research Hospital, March of Dimes, and the USA Swimming Foundation. When Omega Psi Phi Fraternity President Antonio Knox made an appeal to support Historically Black Colleges and Universities during the convention, sorority members contributed more than $26,000 on the spot. Sigma Gamma Rho college members and members of the sorority’s young girl affiliate, Rhoer Club, collected and prepared over 1,000 bags filled with toiletry items for needy families at Ronald McDonald House of Dallas.

Sigma Gamma Rho Sorority, Inc., an international collegiate and non-profit community service organization, was founded in 1922 on the Butler University campus in Indianapolis Indiana. It has welcomed more than 90,000 members who have joined the organization as undergraduates and professionals. Official affiliate groups include Rhoer Club (young girls) and Philos (friends of the sorority). The sorority has more than 500 chapters in the United States, Bahamas, Bermuda, Canada, Germany, South Korea and the U.S. Virgin Islands. It is the mission of the sorority to enhance the quality of life for women and their families in the U.S. and globally through community service. Programs, initiatives, and partnerships are devoted to progress in the areas of education, healthcare, political action, and leadership development. It is headquartered in Cary, North Carolina, and is a member of the National Pan-Hellenic Council’s “Divine Nine.” For more information, visit www.sgrho1922.org