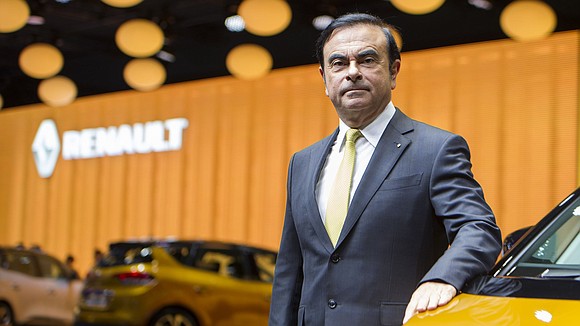 (CNN) -- The tension in the world's biggest autos alliance was laid bare Monday when Nissan said it had been denied an opportunity to tell Renault's board the full story about why it fired Carlos Ghosn in late November.

Nissan (NSANY) CEO Hiroto Saikawa told reporters that the Japanese carmaker wants to show the board of its French partner evidence it collected of "significant" wrongdoing by Ghosn, who remains CEO and chairman of Renault (RNSDF) while locked up in a Tokyo jail. So far, Nissan has only briefed lawyers for Renault.

The stalemate highlights the serious differences within the alliance, which also includes Mitsubishi Motors (MMTOF), on how to handle the allegations against Ghosn.

"We would like to explain to [Renault's board] if we are given the chance," Saikawa said following a meeting of Nissan's board. "We hope Renault's board directors will listen to the explanation."

Tokyo prosecutors last week indicted Ghosn on accusations he under-reported his income in Nissan corporate filings by about 5 billion yen ($44 million) between 2010 and 2015. They also rearrested him on additional allegations covering his income between 2015 and 2018.

Ghosn was stripped of his role as chairman at Nissan and Mitsubishi following his arrest in November. Renault has appointed interim management but kept Ghosn on the payroll.

Tensions between the partners, which have long been rumored, are now bursting into the open.

On Monday, Saikawa sidestepped questions on a report in the Wall Street Journal that suggested Renault wants an emergency meeting of Nissan shareholders as part of an effort to reassert control over its Japanese partner.

Nissan and Renault both declined to comment on the matter. Renault owns a 43% voting stake in Nissan.

Nissan, Renault and Mitsubishi Motors together employ more than 470,000 people in nearly 200 countries. They sold more than 10.7 million cars worldwide in 2017.

The three companies have more in common than Ghosn, who crafted the alliance after leading successful turnarounds at Renault and Nissan. They also share ownership stakes, as well as technology and manufacturing facilities.

That would make a breakup extremely difficult.

"All sides need each other because they have no alternative," said Campbell Gunn, a senior adviser at investment firm Tap Japan. "It's impossible to unwind these relationships and set up new ones."

Still, the partnership is unequal. Nissan, which sells more vehicles than Renault, has only a 15% non-voting stake in the French company.

Some analysts have suggested that Nissan executives were uncomfortable about the possibility of Renault and Ghosn seeking a full merger, which would give the French company more control over Nissan.

Saikawa told employees at a town hall meeting this month that Ghosn had accumulated too much power at the top of the alliance. On Monday, he said that Nissan would have to act in its own interests.

"We would like to listen to Renault's opinion as [an] alliance partner," the CEO told reporters. "But we are the ones who are responsible for the governance of Nissan."

All three alliance partners renewed their commitment to one another at a meeting in Amsterdam earlier this month, but that doesn't tell the whole story.

The French government is the biggest single shareholder in Renault. Analysts say that Nissan is concerned that Renault could do what's best for the French economy, rather than the alliance.

Meanwhile, the Japanese government would be wary of letting one of its biggest companies coming under French control via a full merger.

"A merger is effectively off the table," said Gunn.

Ghosn, meanwhile, faces a challenging court battle. He filed a complaint against his detention last week but it was rejected. More than 99% of people charged with a crime in Japan are eventually convicted, according to experts.

The alliance architect was skilled at finding common cause between the three companies. If they are to stick together, they'll need a replacement who can successfully navigate the same issues.

"It's hard to see who takes the lead," Gunn said.