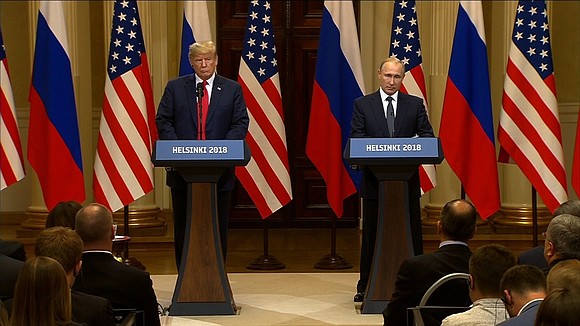 So why is Trump so loath to say a negative word about Putin? Here are a few theories -- ranked from most to least favorable for Trump:

He believes that geopolitical concerns -- Russia's role in dealing with North Korea, Syria etc. -- trump (ahem) everything else. Under that line of thinking, Trump sees Russia (and Putin) as a sort of necessary evil. He avoids calling out Putin as part of an effort to achieve the greater good.

Trump is drawn to strongmen with a tinge -- or more than a tinge -- of authoritarianism in their leadership style. There's a part of him that admires Putin's ability to command total fealty -- and not have to deal with an adversarial (aka independent) media.

What's clear is that Trump isn't going to emerge from Monday's summit/meeting -- sum-meeting? -- with much to say about Putin that's negative. He hasn't done it in 18 months as President -- and two more years as a candidate -- and he ain't going to start on Monday in Helsinki.

So don't hold your breath.