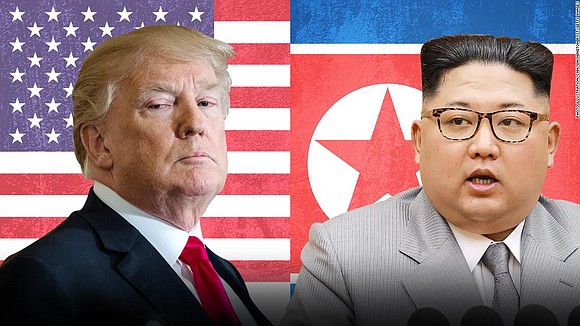 "We have had substantive and detailed meetings to date, including this morning with the North Koreans."

US negotiators led by Ambassador Sung Kim, who was recently tapped to handle North Korean affairs, met with their North Korean counterparts in Singapore Monday, after days of talks to hammer out details of the summit.

Choe and Kim's teams met at separate chic hotel, the Ritz Carlton, in Singapore for more than 90 minutes Monday. The North Koreans were mobbed by reporters as they left.

Kim's departure for Singapore made front page news in North Korea, where the state-run Rodong Sinmun newspaper carried images of a ceremony for Kim as he boarded the Air China plane Sunday local time.

On state-run KCTV, famed North Korean news anchor Ri Chun Hee informed the nation that Kim had arrived, declaring that Kim was "very happy" to be visiting Singapore, and that he thanked the "outstanding and beautiful nation" for its hospitality.

In Singapore, residents lined the streets as Kim's motorcade passed soon after his arrival. Journalists in the city to cover the talks and pedestrians alike took stood outside the St. Regis Hotel, where Kim is believed to be staying, trying to catch a glimpse of the leader.

Soon after touching down in the city, Kim met Singapore's Prime Minister, who has spent $15 million (20 million Singapore dollars) to host the summit.

The two were photographed smiling, shaking hands and sitting down together, with Kim appearing at ease playing the role of global statesman on his furthest journey away from Pyongyang since taking power in 2011.

Kim returned to the St. Regis after the meeting, and as of Monday hadn't been seen since. The hotel has been surrounded by a tight security presence Monday, however pedestrians have been allowed to pass by the hotel, with some peering in to see what's going on.