Allison Kugel: It’s interesting to hear you say that. My son is half Jewish and half Jamaican, and he does the same thing. He tends to gravitate towards people he sees on television, in film, and with music, who have his skin tone and his hair.

Lenny Kravitz: Yup! I have the same background, except I’m Jewish and Bahamian.

Allison Kugel: When and where do you feel most creative and musical? 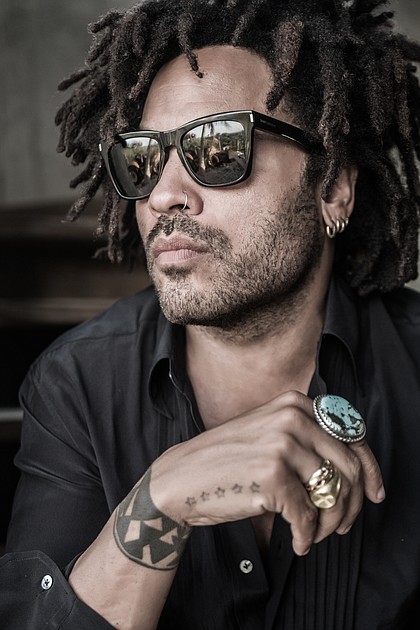 Lenny Kravitz: It could be anywhere, but it’s in the studio, so wherever that may be. My studio is in the Bahamas. It’s my favorite place to work; it’s my workshop. When I’m in the studio and I’ve got all my equipment and all my instruments, and everything is set up, that’s the magical place for me. It’s where I’m comfortable and where I can flow. When I’m inspired and in that flow, I can move. I jump around from instrument to instrument, and it’s wonderful.

Allison Kugel: You are such a true musician in every sense of the word. Aside from singing, you play several instruments, and you write and produce. When you record your music, is it all you doing everything in the studio? Are you recording all of the instrumentals in addition to doing your vocals and producing?

Lenny Kravitz: Yes, I start on drums normally and then I go to a guitar, a bass, another guitar, keyboard, percussion… I keep layering as though I was painting, until my picture is complete.

Allison Kugel: Your upcoming album is called Raise Vibration and the first single, It’s Enough, is a call-to-action anthem about political corruption and social and racial injustice. Was writing It’s Enough a form of therapy for you, and a way of turning hopelessness into empowerment? For example, I live part of the year in Florida, not too far from Parkland. When the Parkland school shooting happened, I went into a depression where I was feeling helpless as a parent. Then I thought, “I’m a writer. I can contribute something by writing a piece about this.” Was it a similar process for you?

Lenny Kravitz: I react to the world. Just as you say you did, I have a reaction. I actually recorded the song twice. I was trying to find the direction for the record. The way the song started, the first version of It’s Enough was a full-on guitar, bass, drum, punk rock song. It had an angry tone to it, because that felt like the proper reaction. And then I thought about it and ended up changing it and finding this groove, which is the polar opposite of what it started out as. I found that by being calm and by being centered and by being quiet, it was more effective. It brought out a whole new feeling in the song, and I think it enables the listener to hear the lyrics even better.

Allison Kugel: And you feel it brings more of a positive energy, as opposed to the original version, which would have brought forth anger.