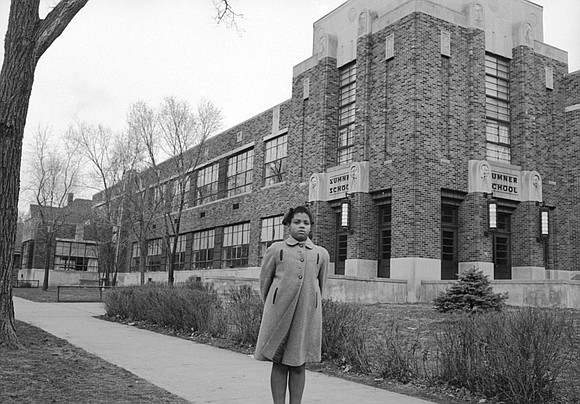 (CNN) -- Linda Brown, who as a little girl was at the center of the Brown v. Board of Education case that ended segregation in American schools, has died, a funeral home spokesman said.

Brown was 9 years old in 1951 when her father, Oliver Brown, tried to enroll her at Sumner Elementary School, then an all-white school near her Topeka home. When the school blocked her enrollment her father sued the Topeka Board of Education. Four similar cases were combined with Brown's complaint and presented to the Supreme Court as Oliver L. Brown et al v. Board of Education of Topeka, Shawnee County, Kansas, et al.

While her name will forever be a part of American civil rights history, her contributions to the community after the case are part of her legacy, too, longtime friend Carolyn Campbell said.

Campbell attended St. Mark's African Methodist Episcopal Church, where Brown played piano and taught children how to play. Before her death, the church dedicated the piano to her.

Campbell described her as a "very quiet person, but spiritual, patient and very kind."

"Linda was a spiritual Christian woman that loved not only the Lord, but she loved her family and took on the responsibility of what Brown v. Board of Education meant to her. Her legacy will be that she shared all of her life with all of us," Campbell said.

She was also instrumental in one of the church day care programs, Campbell said.

"She would read books to children, she was all about children and education."

A 'normal' schoolchild who transformed the country

The court ruled in May 1954 that "separate educational facilities are inherently unequal," a violation of the 14th Amendment of the US Constitution, which states that no citizen can be denied equal protection under the law.

Thurgood Marshall, the NAACP's special counsel and lead counsel for the plaintiffs, argued the case before the Supreme Court.

"Linda Brown is one of that special band of heroic young people who, along with her family, courageously fought to end the ultimate symbol of white supremacy -- racial segregation in public schools. She stands as an example of how ordinary schoolchildren took center stage in transforming this country," said Sherrilyn Ifill, president and director-counsel at NAACP Legal Defense and Educational Fund.

"It was not easy for her or her family, but her sacrifice broke barriers and changed the meaning of equality in this country."

The ruling overturned Plessy v. Ferguson, which established the separate but equal doctrine that formed the legal basis for Jim Crow laws. The court directed schools to desegregate "with all deliberate speed," but it failed to establish a firm timetable for doing so. The Supreme Court would outline the process of school desegregation in Brown II in 1955, but it would take years for schools across the nation to fully comply.

"Sixty-four years ago a young girl from Topeka brought a case that ended segregation in public schools in America. Linda Brown's life reminds us that sometimes the most unlikely people can have an incredible impact and that by serving our community we can truly change the world."

'I began to cry because it was so cold'

Brown was born in 1943, according to the National Archives. When her father joined the lawsuit, neighborhoods in Topeka were partially integrated, Brown said in a 1985 interview for the documentary series "Eyes on the Prize: America's Civil Rights Years."

High schools and junior high schools were integrated, too, she said. The only schools that were not were elementary schools, including hers, Monroe Elementary School, she said.

In 1954, there were four African-American schools and 18 white schools in Topeka.

To reach the bus that carried her and her sisters 2 miles across town to the all-black school, she said she had to walk through railroad yards and across a busy avenue.

"I remember the walk as being very long at that time," she said in 1985. "And then when wintertime came, it was a very cold walk. I remember that. I remember walking, tears freezing up on my face, because I began to cry because it was so cold, and many times I had to turn around and run back home."

In 1950 her father, a welder and an associate pastor, joined the Topeka NAACP's legal challenge to a Kansas law that permitted racially segregated elementary schools in certain cities based on population. He attempted to enroll her in Sumner Elementary School in 1951.

"My father was like a lot of other black parents here in Topeka at that time. They were concerned not about the quality of education that their children were receiving, they were concerned about the amount -- or distance, that the child had to go to receive an education," Brown said in the 1985 interview.

"He felt that it was wrong for black people to have to accept second-class citizenship, and that meant being segregated in their schools, when in fact, there were schools right in their neighborhoods that they could attend, and they had to go clear across town to attend an all-black school. And this is one of the reasons that he became involved in this suit, because he felt that it was wrong for his child to have to go so far a distance to receive a quality education."

Monroe and Sumner elementary schools became National Historic Landmarks on May 4, 1987, according to the National Park Service. President George H.W. Bush signed the Brown v. Board of Education National Historic Site Act of 1992 on October 26, 1992, which established Monroe as a national park.