15 biggest cruise ships in the world 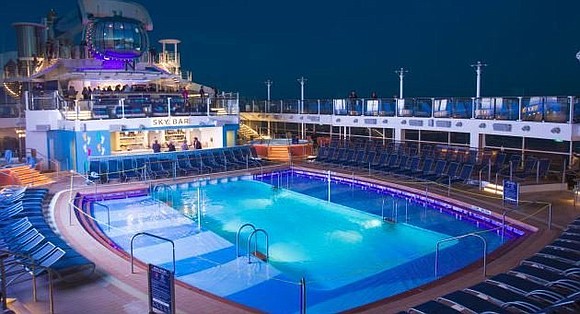 Quantum of the Seas is a huge ship, which usually cruises out of China, boasts a retractable roof over its pool for fun times come rain or shine. CREDIT: Courtesy Royal Caribbean International

(CNN) -- When Symphony of the Seas, an 18-deck cruise ship measuring longer than a nuclear-powered aircraft carrier, sailed out of port for the very first time this April, it smashed yet another size record in the cruise industry.

But the current largest passenger ship in the world is hardly one of a kind.

Her slightly smaller sister ships -- the Harmony of the Seas, the Allure of the Seas and the Oasis of the Seas -- each held the honor of this title at the time of their launch, only to be dethroned shortly after in what seems like an endless race to build ever larger cruise ships.

If the names of these four floating cities sound similar, it's not by coincidence.

"Most of the largest ships in the world are sister ships. A family of ships, such as Royal Caribbean's Oasis class, to which the Symphony belongs, are built according to the same specifications and with only minor differences between them," explains Colleen McDaniel, senior executive editor at Cruise Critic, a leading publication specializing in cruises.

"It is a successful formula that has been scaled up," McDaniel adds.

The reason that they've become so gigantic, says McDaniel, is not only to accommodate more passengers, but also to stuff them with added extras such as water shows to keep everyone distracted.

"These ships are really packed with activities," she says.

1. Symphony of the Seas

As you'd expect from the largest cruise ship in the world, everything about the Symphony of the Seas is on a large scale. There are 18 decks (of which 16 are for guest use), 22 restaurants, 24 pools, 2,759 cabins, a park with over 20,000 tropical plants.

Not to mention the world's tallest water slide at sea.

Like Royal Caribbean's other Oasis-class ships, Symphony is organized in so-called "neighborhoods," and contains seven of them.

"These are theme areas that replicate what you can find in cities. People have a feel that there is so much to see and you would need days to really explore what's in all these different areas," McDaniel explains.

"Everyone has their favorite neighborhood. They are unique spaces and, despite the large number of people onboard, the flux is managed in a very smart way, you never get the feeling of being in a crowded space.

However, if all goes according to plan, Symphony of the Seas' days being the largest ship in the world are already numbered.

The Oasis-class' fifth ship, which will be even larger, is expected to enter service in 2021.

2. Harmony of the Seas

Harmony of the Seas shares much of the same layout and onboard services and activities as Symphony of the Seas (as do the next two ships on the list.)

The billion-dollar ship has a maximum capacity of 6,687 and measures 1,188 feet.