The war on voting rights: Will your ballot count? 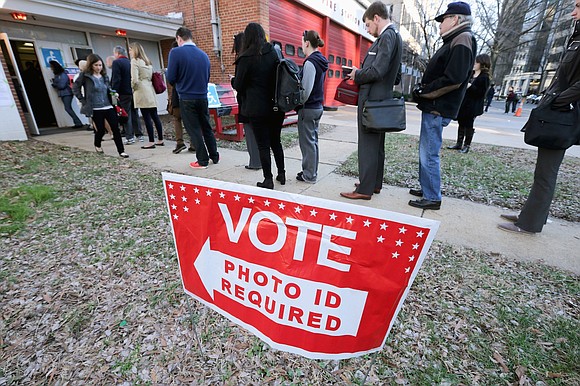 By Kyung Lah and A. Chris Gajilan, CNN

(CNN) -- Kansas Secretary of State Kris Kobach has been called many things.

"The architect of voter suppression nationwide," and "vote suppressor in chief," critics Ari Berman, an author, and Jason Kander, a politician, have warned.

"The ACLU's worst nightmare," an announcer declared at the start of each episode of Kobach's former talk radio show.

When we sat down with Kobach in his Topeka office for a rare interview, we learned he is some of those things and more -- a zealot who believes voter fraud exists and it is his mission to stop it. He is a preacher to the converted. He refuses to acknowledge well-established evidence that voter fraud is extremely rare -- that, for example, stealing someone's identity to vote is less likely than being struck by lightning, as the nonpartisan Brennan Center for Justice at the New York University School of Law put it.

When Trump claimed he would have won the popular vote "if you deduct the millions of people who voted illegally," he and White House advisers Kellyanne Conway and Stephen Miller pointed to Kobach. Since the 2016 election, Trump's repeated assertions of widespread voter fraud have been debunked over and over again.

Kobach was also the man Trump tapped to lead his Presidential Advisory Commission on Election Integrity. At its first meeting in July 2017, the President declared, "Any form of illegal or fraudulent voting, whether by non-citizens or the deceased, and any form of voter suppression or intimidation must be stopped... I look forward to the findings and recommendations your report will produce ... the full truth will be known and exposed, if necessary, in the light of day."

Less than six months after it convened, the Commission disbanded without ever releasing any findings.

Today, Kobach is the GOP candidate for governor of Kansas. He's the leading proponent for the strictest voting laws in the nation and a controversial figure featured in the forthcoming CNN documentary, "Democracy in Peril: The War on Voting Rights," premiering Friday, November 2 at 11 p.m.

For the better part of a year, our team has traveled across the country meeting people at the front lines who work tirelessly in the lead up to election day: the activists, the politicians, the lawmakers, and the academic researchers who study voting. We interviewed older people who have voted in elections for decades but who are suddenly dealing with obstacles in casting their ballot. We met a man who faced years in prison and hundreds of thousands of dollars in fines as he was prosecuted for voter fraud. We sat down with plaintiffs bringing their landmark case to the US Supreme Court because of fears their votes will not matter.

Under a new requirement in North Dakota, Native Americans must show specific forms of photo ID bearing their street address. The problem is there are few actual street names on the reservations. Many Native American residents receive their mail by P.O. box and do not know their address, much less have a photo ID with it imprinted. Critics say this is an additional layer of bureaucracy that suppresses this community. North Dakota is where Democrat Heidi Heitkamp won her Senate seat by fewer than 3,000 votes in 2012.

Over the summer, controversy swirled after a proposal to close seven of nine polling places in a majority-black county in Georgia.

A struggle in Georgia

Meanwhile, Georgia Secretary of State Brian Kemp, who is also the Republican nominee for governor, faces backlash and lawsuits after the Associated Press reported his office suspended more than 53,000 voter applications. Almost 70% were registrations by African-Americans. Kemp's office maintains that those voters will be allowed to vote, most likely by provisional ballot, if they bring the proper ID.

"What about those low-propensity voters... They don't know they can go to the polls," she said. "They get a confusing letter saying there is something wrong with their registration, and, more than likely, they will sit out this election. The miasma of fear that is created by voter suppression is as much about terrifying people about trying to vote as it is about blocking their ability to do so."

The Kemp campaign calls the accusations of voter suppression in Georgia "bogus" and points to a "record high" of voter registrations and turnout under Kemp's tenure.

It's the same response Kansas Secretary of State Kobach gives when questioned over the impact of his own state's strict voter ID laws and whether they disenfranchise voters.

"I'm trying to stop voters from committing fraud, which effectively disenfranchises the people who are voting legitimately... Voter fraud infects the whole system. Not only does it potentially tip a result, you know, to the candidate that didn't actually win the election, it also affects the willingness of people to vote," Kobach said.

Kobach is a strident believer that measures like requiring photo identification on Election Day and proof of citizenship when registering to vote, plus purging outdated voter rolls, are necessary to maintain election integrity.

'Just part of their strategy'

"Over the course of our history, it has not been exclusively one party that has perpetrated voter suppression. It has been people in power against people who have less power," says Jason Kander, a Democrat, former Missouri Secretary of State and founder of the grassroots organization Let America Vote. "In the modern iteration of voter suppression over about the last two decades, that has been the Republican Party and it's just very plain to see. It's just part of their strategy."

It's not a partisan issue according to Kobach, despite a body of research that shows people of color, the poor and college students are disproportionately affected by these laws.

"One of the interesting things about the issue of voter fraud and photo ID is that it unfortunately has become partisan," Kobach said. "We all have an interest in making sure that the elections are fair and square."

Author Ari Berman says the fundamental right to vote is under threat.

"If it's Democrats doing this to Republicans or Republicans doing this to Democrats, the fact that people are having trouble exercising one of the most fundamental rights in the year 2018 is a huge scandal," said Berman, who wrote "Give Us the Ballot: The Modern Struggle for Voting Rights in America."

It's getting increasingly harder to vote in this country. Hundreds of new restrictions in a majority of states have been introduced since 2011. And the US trails most other developed countries in voter turnout.

"We should be encouraging putting in place measures to make voting easier, getting as many people to the polls as we possibly can, as opposed to restricting and making it more difficult for people to cast a ballot," argued former US Attorney General Eric Holder.

He has teamed with former President Obama to create the National Democratic Redistricting Committee to reform the way district voting maps are drawn. It's part of an effort to eliminate partisan gerrymandering, what many call a form of voter suppression.

Kobach and other advocates for strict voting laws say their goal "is not to try to discourage one party or the other from registering," but rather to "make it easy to vote and hard to cheat."

That issue of cheating is at the core of the war on voting rights. We talked to election researchers and experts all around the country. They all agree that there is zero evidence for widespread voter fraud, whether by citizens or non-citizens.

He claims a bigger mission

"The argument that there's massive voter impersonation, fraud... It is demonstrably untrue," said Kenneth Mayer of the Elections Research Center at the University of Wisconsin-Madison.

"It's a philosophical movement where you have advocates who claim massive levels of voter fraud -- the President for one, Kris Kobach, the Secretary of State in Kansas -- who have been pounding the drums insisting that this is a major problem, and people wind up believing that," Mayer said.

In Kansas, Kobach has claimed there are hundreds of non-citizens on the voter rolls. In 2015, he convinced the state Legislature to make him the only Secretary of State in the country with the power to prosecute election crimes.

In the three years Kobach has had the authority, 15 people have been charged with voter fraud. Of the 14 convicted, three have been non-citizens, including one in the process of becoming a naturalized citizen who had not been sworn in.

That's three non-citizens over the course of several elections in a state with 1.8 million registered voters.

But for Kobach, the mission is much larger than the handful of prosecutions. He claims those numbers are just the tip of the iceberg.

He and the disciples of "voter integrity" have pledged to continue their crusade in America.