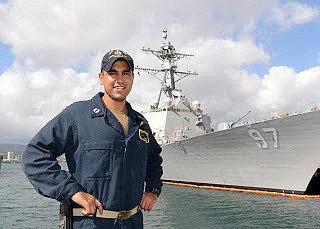 Pruthi credits success in the Navy to many of the lessons learned in Sugar Land.

“My hometown taught me the value of treating people with respect and going out of one's way to help another,” said Pruthi.

Halsey measures approximately 500 feet and is powered by four gas turbines that allow the destroyer to achieve more than 30 mph in open seas.

Approximately 30 officers and 300 enlisted men and women make up the ship's company. Their jobs are highly specialized and keep each part of the cruiser running smoothly, according to Navy officials. The jobs range from maintaining engines and handling weaponry to washing dishes and preparing meals.

As a Navy damage control assistant, Pruthi is responsible for controlling and limiting the impact of wear and damage to the ship, as well as overseeing 26 sailors in the repair division.

Being stationed in Pearl Harbor, often referred to as the gateway to the Pacific in defense circles, means Pruthi is serving in a part of the world taking on a new importance in America’s focus on rebuilding military readiness, strengthening alliances, and reforming business practices in support of the National Defense Strategy.

“Our priorities center on people, capabilities and processes, and will be achieved by our focus on speed, value, results and partnerships,” said Secretary of the Navy Richard V. Spencer. “Readiness, lethality and modernization are the requirements driving these priorities.”

Pruthi is establishing a tradition of military service for his family.

“I have a younger brother in the Marine Corps at flight school in Corpus Christi, Texas,” said Pruthi. “We are the first in our family to serve in the military, and it means a lot for us to have this opportunity to pave the way forward.”

Though there are many ways for sailors to earn distinction in their command, community, and career, Pruthi is most proud of leading a hardworking group of sailors.

“Despite working long hours through a demanding deployment and shipyard repairs, they continue to demonstrate dedication on a daily basis,” said Pruthi. “Through their actions, they remind me of the meaning of the quote, 'Greater love hath no man than this, that a man lay down his life for his friends.’”

As a member of one of the U.S. Navy’s most relied upon assets, Pruthi and other sailors know they are part of a legacy that will last beyond their lifetimes, one that will provide a critical component of the Navy the nation needs.

“Serving in the Navy means I get to be part of a team that represents freedom and democracy around the world,” added Pruthi. “It has been a humbling experience to represent the U.S. while maintaining freedom of the seas wherever we go.”