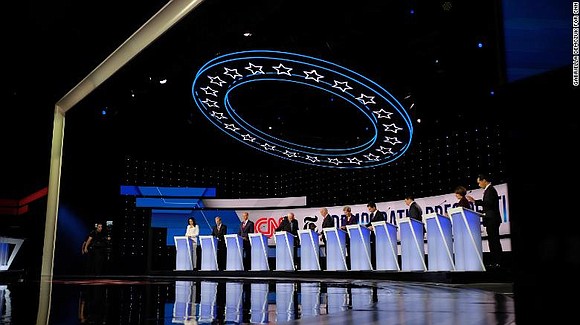 The most diverse field of Democratic presidential candidates in history is now boiled down to a debate stage that lacks black or Latino candidates.

The Democratic National Committee on Friday unveiled the list of seven candidates who met the polling and fundraising minimums to qualify for the December 19 debate in Los Angeles. It includes one person of color: entrepreneur Andrew Yang.

The announcement comes amid a labor dispute that has threatened to derail planning for the debate at Loyola Marymount University. The food workers' union has said it plans to picket the debate, and all seven candidates invited to participate said Friday they will not cross the picket line. The DNC said Friday afternoon it is "working with all stakeholders to find an acceptable resolution" that allows the debate to go on without expecting candidates to break with the union.

New Jersey Sen. Cory Booker will miss the stage for the first time, and former Housing and Urban Development Secretary Julián Castro is off-stage for the second time. California Sen. Kamala Harris dropped out of the race, and a late entrant, former Massachusetts Gov. Deval Patrick, hasn't yet come close to qualifying for a debate.

The trimmed-down debate lineup has frustrated some Democratic donors, operatives and activists who hoped to see a field more representative of the party's base. It also underscores a reality of the 2020 race: Polls and fundraising numbers reflect that candidates of color just aren't getting much support from voters of color.

"The dominance of white candidates in the race confirms something we should have already known: The political system was not set up to include candidates of color," Democratic strategist Jess Morales Rocketto said.

The smaller debate stage might reflect the favorites of established Democratic voters and donors, but makes it harder to expand the party's electorate, some organizers said.

"It is particularly disheartening to see that the folks we organize won't be able to watch the debate and see anyone who looks like them," said Quentin Savwoir, the political director of Make It Work Nevada, an advocacy group that organizes women of color. "Cory Booker's story, Kamala Harris's story -- that resonates differently with the folks we work alongside, because they understand what it means to have lived those experiences."

He said he didn't want to diminish the presence of Yang on stage, since Asian American and Pacific Islanders are the fastest-growing demographic in Nevada, but called it disappointing that the Democratic Party is "still not investing in people of color as candidates."

Others point out that the winnowing stage is the reality of a field where non-white candidates have failed to galvanize non-white voters. Former Vice President Joe Biden has dominated in polls among African-American voters, and Biden and Vermont Sen. Bernie Sanders have shown the most strength with Latinos.

"You have to play with the hand that you're dealt," Seawright said. "Some people will always attack what's not working for them."