'New Amsterdam' may be a drama, but it's looking at this real-life heart issue 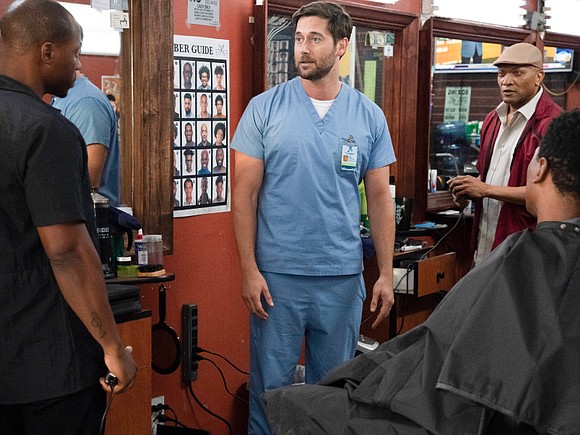 The New Amsterdam Medical Center is an active place. At any second, the ER might have to revive a man whose heart stopped after a basketball game with the friendly but convention-defying hospital director, while at the same time its staff is sleuthing out the cause of a child's illness, grappling with the ethics of treating a terminally ill patient and sneaking away for the occasional tryst.

This is not a documentary.

But New Amsterdam viewers who tuned into the NBC drama on Tuesday saw a storyline based in reality for many African American men.

In the episode, "Denominator," the revived man expresses disdain for regular checkups, even after being told his "heart is working overtime" because of high blood pressure.

"Why go to the doctor when you're healthy?" the patient asks.

"Best time to go to the doctor is before you get sick," says the show's central character, Dr. Max Goodwin, who is inspired to start a high blood pressure outreach program at an African American barbershop.

Foster, it turns out, is a Harvard-trained doctor.

"Back in my day when I was a practicing physician, a number of people that I was working with were trying out different ways of getting medicine out of the clinic and into other nontraditional settings," he said. Last year, he came across a New York Times article about a study that showed impressive success in treating high blood pressure when pharmacists set up in black barbershops across Los Angeles County.

High blood pressure rates for African Americans in the U.S. are among the highest in the world, with 58% of men and 53% of women having the condition. High blood pressure, also known as hypertension, increases the risk of heart disease and stroke and can cause permanent heart damage even before a patient notices any symptoms.

The episode suggests mistrust of the medical system can be a major barrier to care for black men. It references the Tuskegee syphilis experiments and other heinous medical history.

To get the message right, Foster said the show drew inspiration from interviews with young African American men with hypertension; the writers' own experiences; and visits to several barbershops in Brooklyn, where the show is filmed.

"Although we are doing a fictional show, it is important for us to also live in the world of reality," Foster said.

Dr. Willie E. Lawrence Jr. is very much in the real world of health care. He's chief of cardiology at Research Medical Center in Kansas City, Missouri. He said fighting high blood pressure by meeting people where they are through outreach has been successful in barbershops, churches and elsewhere.

He personally doesn't see mistrust as the biggest barrier to African Americans getting care after a major cardiac event, such as the one depicted in the show. But getting people to take part in follow-up care can be.

"It's not always because they don't trust their physician," Lawrence said. "It's sometimes financially driven — they don't have the money to take medications."