Families of Color Want to See Kamala Harris, Even If She's Not Locked Down Their Vote 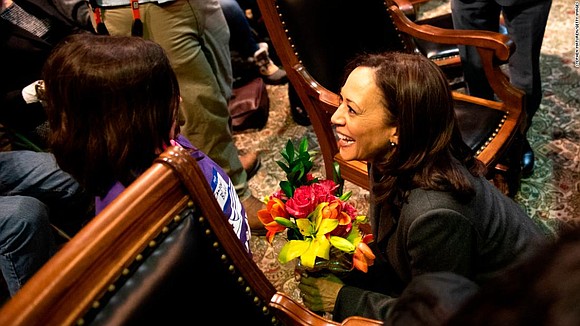 Harris said she is energized by meeting children on the trail, as here in the Iowa statehouse.

Elijah Little laid his head on his father's shoulder, the warmth of the packed hall in West Des Moines, Iowa, wearing on him. But the 6-year-old boy's eyes continued to dart back and forth during the political rally, between the people cheering in the crowd and the California senator speaking at the microphone, Kamala Harris.

Here were people who looked like his own diverse family -- still more often the rarity than the norm in this state.

And there on stage was Harris herself -- a biracial woman of color running for president.

It's an image Elijah's parents think will be part of his path to racial awareness. They also want for it to be a sign of hope amid the recent tumult of the allegedly racist El Paso massacre and reports of hate crimes across the country.

"He's aware that his dad is black, his mom is white," said Elijah's mother, Jessica. "We push really hard to make sure that's not bad, it's beautiful. That's what the United States is."

Elijah's father Eric adds: "It's important we give him a sense that it's OK for him to be who he is in this community. We need to have him see what the political process is about, so he gets an idea of it and he gets a feel for what it means to be a part of this country."

Presidential candidates can engage and sometimes empower those who share some part of their identity. Barack Obama's candidacy and victory felt like it opened doors to other African Americans, while Hillary Clinton's loss represented to many women the unwillingness of the country to break the last glass ceiling on the way to the Oval Office.

The 2020 Democratic hopefuls are historically diverse, with more women and people of color than ever before. But Harris carries both gender and race on the stage as a visual promise for the next generation.

Diverse parents and their children say her very presence in the 2020 race, amid a rising tide of hateful rhetoric, is meaningful. CNN has seen families of color bear witness at Harris rallies from Iowa to South Carolina to Nevada this year.

That is not lost on the candidate herself, who weaves a fundamental philosophy from her mother into her stump speech. Shyamala Gopalan, an immigrant from India, peppered her daughters Kamala and Maya with many sayings, among them, "You may be the first to do many things. Make sure you're not the last."

It's a lesson that Harris appears to embody, repeatedly pausing and talking to children at her events.

"When I see those little girls in particular, I see myself," said Harris in an interview with CNN. "I see the children of my family. I see the children of our country. And I see the promise of our country. It means the world to me. It is about helping all children to see what's possible. This is what's possible. Don't you ever accept what anyone tells you are the limitations of what you can do based on your race or gender."

She gets energy from inspired children on the long campaign trail.