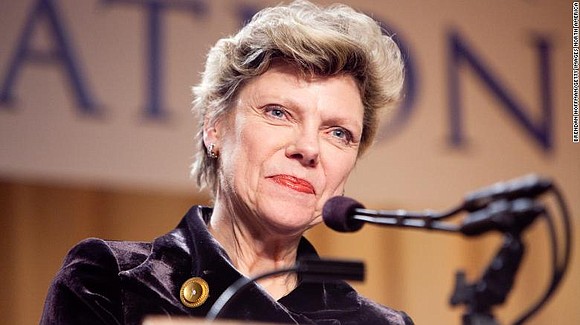 Veteran journalist Cokie Roberts, winner of three Emmys and a legend and trailblazer in broadcasting, has died at the age of 75, ABC News announced.

Roberts worked in television, public radio and publishing for over 40 years. She began her tenure at ABC as a contributor for "This Week with David Brinkley" and later became ABC's chief congressional analyst.

Roberts is survived by her husband Steve V. Roberts and her children Lee Roberts and Rebecca Roberts, her grandchildren Regan, Hale and Cecilia Roberts and Claiborne, Jack and Roland Hartman, along with nieces, nephews, and cousins.

"We will miss Cokie beyond measure, both for her contributions and for her love and kindness," Roberts' family said in a statement.

Roberts died due to complications from breast cancer, her family's statement said.

"She will be dearly missed. Cokie's kindness, generosity, sharp intellect and thoughtful take on the big issues of the day made ABC a better place and all of us better journalists," ABC News president James Goldston said in a statement.

Roberts began her career in the 1960s at WNEW and KNBC-TV. She joined CBS News in 1974 and then NPR in 1978, for which she covered Capitol Hill and reported on the Panama Canal Treaty. She also served as a correspondent for "The MacNeil-Lehrer Newshour" and as a contributing senior news analyst for PBS.

"Cokie was one of NPR's 'founding mothers,' since 1978 her signature voice and commentary have accompanied public radio listeners, provided context for news and been a familiar presence in their homes," NPR president and CEO Jarl Mohn said in a statement.

I'm writing with very sad news. Our dear friend and colleague Cokie Roberts passed away this morning in Washington, surrounded by her family and closest friends.

Cokie had a storied career over 40 years in television, public radio and publishing. She started at ABC as a contributor for This Week with David Brinkley, appearing frequently on the roundtable. She was ABC's chief congressional analyst, anchored This Week with Sam Donaldson from 1996 to 2002 and was known as one of the smartest political commentators on television and radio for decades. A true pioneer for women in journalism, Cokie was well-regarded for her insightful analysis of politics and policy in Washington, DC., countless newsmaking interviews, and, notably, her unwavering support for the generations of young women -- and men -- who would follow her in her footsteps.

In the 1970s Cokie started in radio as a foreign correspondent for CBS, before moving to NPR to cover Capitol Hill in 1978. She would go on to become the congressional correspondent for NPR, where she would eventually split her time with ABC News. Cokie is perhaps the only reporter to have filed for Morning Edition, All Things Considered, World News Tonight and Nightline all in a single day.

A terrifically talented writer and historian, Cokie published six books, many of them best-sellers and most about women in American history, whose stories often had been overlooked. She won every major award in journalism and was recognized with over 30 honorary degrees. Cokie was named one of the 50 greatest women in the history of broadcasting by the American Women in Radio and Television, and the Library of Congress declared her a "Living Legend" in 2008, making her one of the very few Americans ever honored.

Her beloved husband Steve was at her side through all of it. They were married for over 50 years and wrote a widely popular syndicated newspaper column and two books together. Cokie and Steve were married in the garden of her parents' Bethesda home, where Cokie grew up and they would later raise their family. They had two children, Lee and Rebecca, and six grandchildren, whom she cherished.

Please join me in sending your thoughts and prayers to Cokie's family and loved ones. Her family passed along the message below. We will share details about the service when they're available.

She will be dearly missed. Cokie's kindness, generosity, sharp intellect and thoughtful take on the big issues of the day made ABC a better place and all of us better journalists. Please take a moment today to remember an exceptional reporter and remarkable friend.