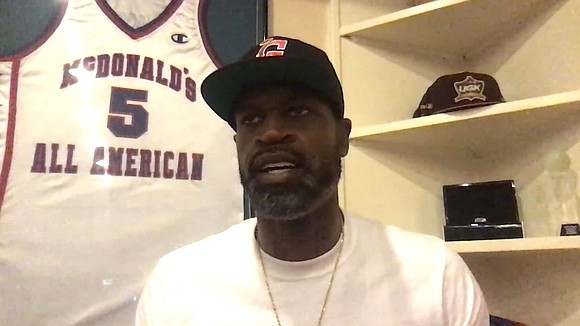 "I could've changed my words, but it's nothing I said that I support any of that," he told CNN on Wednesday night. "I could've switched up, but that's the end of it. I know I love everybody, and that's how I always stand and I'm not going to let anybody demean my character."

Stephen Jackson, who also works as a basketball analyst, was a friend of George Floyd, and became a fixture of Black Lives Matter protests after his pal was killed by Minneapolis police.

Following backlash to his posts that misattributed a trope to Adolf Hitler and said that Jewish people planned to "extort America" and achieve "world domination," DeSean Jackson apologized.

In his apology post, the Philadelphia Eagles wide receiver said he will "fully educate" himself and work with local and national organizations to "be more informed and make a difference in our community."

Later, he sent out an Instagram post, "Your races pain doesn't hurt more than the next races pain. Don't act like your hardships or more devastating then ours. And u wonder why we fighting for equality. Common sense ain't common. Truth Hurts. Never waste time explaining to people who never supported u anyway. Free Game."

Pressed on why he appeared to defend DeSean Jackson after the latter apologized, Stephen Jackson said his words were more related to the Eagles' treatment of DeSean Jackson, in juxtaposition to how the team responded to another wide receiver, the now-retired Riley Cooper, using the n-word seven years ago. Cooper is white.

Asked again why he would co-sign something DeSean Jackson had retracted, Stephen Jackson replied, "Nice try. I've been out here fighting for justice, for equality, and I was speaking on equality -- why they wasn't handling Cooper and DeSean Jackson any other way.

He'll continue that fight, he said, "and that's just the end of it."