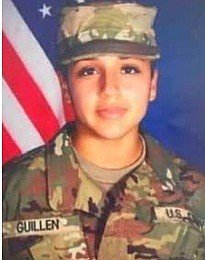 (CNN) -- The US Army on Thursday released the names of five civilians who will review the "command climate and culture" at Fort Hood after the killing of Spc. Vanessa Guillen and "follow the facts wherever they lead."

The review was prompted by the death of the 20-year-old soldier, whose remains were discovered in June, months after her disappearance.

"The Army is committed to taking care of our Soldiers, civilians, families, and Soldiers for life, and this independent review will explore the current command climate and culture at Fort Hood," Army Secretary Ryan McCarthy said in a statement.

The announcement came on the same day that Guillen's mother, Gloria, and other relatives tearfully pleaded with President Donald Trump for justice during an Oval Office meeting.

The independent review is intended to determine whether that climate and culture "reflects the Army's values, including safety, respect, inclusiveness, and a commitment to diversity, and workplaces and communities free from sexual harassment."

The panel, with assistance from a brigadier general and a staff, will study "historical data and conduct interviews with military members, civilians and members of the local community."

The panel members are Chris Swecker, a Charlotte, North Carolina, attorney and former FBI assistant director; Jonathan Harmon, a trial lawyer who has represented Fortune 500 companies across the country; Carrie Ricci, an assistant general counsel for the US Department of Agriculture; Queta Rodriguez, a Bexar County, Texas, resident and regional director for FourBlock, a nonprofit that helps veterans transition into civilian careers; and Jack White, an attorney with expertise in government investigations and discrimination claims.

"I commit to providing a complete and thorough review of the command climate at Fort Hood and to follow the facts wherever they lead," Swecker, who will lead the panel, said in a statement.

Guillen, 20, vanished in April. Her remains were discovered June 30 in a shallow grave, according to family attorney Natalie Khawam. The US Army later positively identified the remains as Guillen.

The small-arms repairer was bludgeoned to death with a hammer in the armory room where she worked, and her body was transported from the installation by her killer, Khawam said, citing details the family learned from Army investigators.

Spc. Aaron Robinson, a 20-year-old soldier suspected in Guillen's disappearance, killed himself after police confronted him in Killeen, Texas, earlier this month.

A tearful Gloria Guillen asked the President to help the family investigate her daughter's death and to support a bill that would change the way sexual harassment and assault is reported in the military.

"The FBI and the DOJ are now involved," Trump told Guillen's parents and two sisters in the Oval Office.

"We got them involved. And people at Fort Hood, where it took place, are very much involved. We didn't want to have this swept under the rug, which could happen."

Multiple reviews or investigations into Fort Hood are underway.