“We Got All Four” 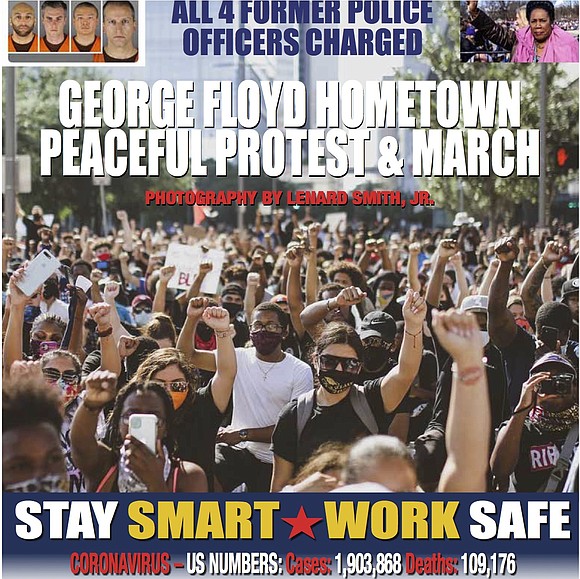 Insult is added to the death of Floyd with tweets from President Donald Trump glorifying violence and the release of Floyd’s autopsy results. The Hennepin County medical examiner made claims that Floyd’s death was a homicide caused by cardiopulmonary arrest. Floyd’s family had an independent autopsy done that determined Floyd’s death was a homicide caused by asphyxia “due to neck and back compression that led to a lack of blood flow to the brain.” An investigation of the Minneapolis Police Department was launched. Nine days after the death of Floyd the other three former officers involved with his murder were charged with aiding an abetting second-degree murder and manslaughter. Chauvin’s charges were upgraded to second-degree murder.

Now we must all breathe for Floyd, the ones that came before Floyd, and the ones that will come after Floyd to see this thru until his murders are tried and convicted. Minnesota Attorney General Keith Ellison, who is prosecuting the case, has said the arrest of the Chauvin, Thao, Kueng and Lane is just the first step towards justice for Floyd as the trial for officers will be difficult to try. If all four men are convicted for the murder of Floyd they could each get a maximum sentence of 40 years in prison.

Just because the four men are now in custody does not mean the fight against racism stops. There are still a number of killers walking free. Hopefully, the trial and conviction of the “Minneapolis Four” will lead to more wrong doers behind bars. The bigger success will be a change of how racism is handle in America.

Former President Barack Obama said, “To bring about real change, we both have to highlight a problem and make people in power uncomfortable, but we also have to translate that into practical solutions and laws that can be implemented and we can monitor and make sure we’re following up on.” He went on to give details of ways to effect change by utilizing the specific evidence-based reforms to build trust and save lives, having mayors review their force policies and commit to report on planned reforms, and having every city increase policy reforms and public-private partnerships for expanded opportunities for men of color.

“It remains a shocking failure that many African Americans, especially young African American men, are harassed and threatened in their own country,” said former president George W. Bush. “Those who set out to silence those voices do not understand the meaning of America or how it becomes a better place.” He went on to say that America’s greatest challenge has been “to unite people of very different backgrounds into a single nation of justice and opportunity” calling it a threat to our Union.

Former President Bill Clinton made a bold statement dividing the way whites and Blacks are treated saying, “No one deserves to die the way George Floyd did. And the truth is, if you’re white in America, the chances are you won’t.” He further added that those in power need to ask themselves certain questions that deal with why this type of behavior keeps happening and listen to the answers. “We can’t honestly answer these questions in the divide and conquer, us vs. them, shift the blame and shirk the responsibility world we’re living in. People with power should go first — answer the questions, expand who’s “us” and shrink who’s “them,” accept some blame, and assume more responsibility. But the rest of us have to answer these questions too.”

“We need a government as good as its people,” stated former president Jimmy Carter. “Dehumanizing people debases us all; humanity is beautifully and almost infinitely diverse. The bonds of our common humanity must overcome the divisiveness of our fears and prejudices.” His solution for change relies on people in power and with privilege standing out to say “no more to racially discriminatory police and justice system, immoral economic disparities between whites and blacks, and government actions that undermine our unified democracy.”

The arrest of was the first very big step towards justice but it MUST certainly not be the last. The wheels of justice must continue to turn. Don’t let the fight stop or voices die out because of this small victory. Let the voices be like that described in the national Black anthem resounding “loud as the rolling sea” and let the bodies “march on till victory is won.”