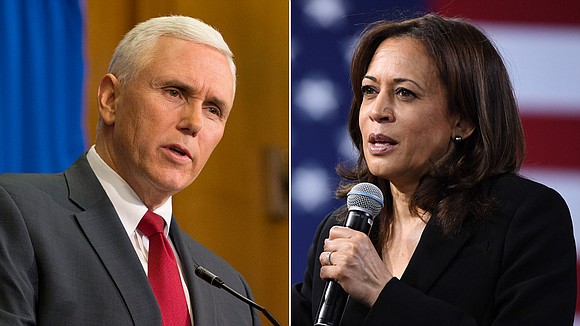 Kamala Harris and Mike Pence are scheduled to face off Oct. 7 in the first and only general election vice presidential debate of 2020. Credit: Getty

(CNN) -- Kamala Harris and Mike Pence are scheduled to face off Wednesday night in the first and only general election vice presidential debate of 2020. The debate will begin at 9 p.m. ET.

The debate comes days after the presidential election was upended with President Donald Trump's announcement that he and first lady Melania Trump had tested positive for coronavirus. Trump spent three days hospitalized at Walter Reed Medical Center, but returned to the White House on Monday.

Pence was in frequent close contact with Trump last week, but has repeatedly tested negative.

The Commission on Presidential Debates said it was taking additional health and safety precautions at the debate, including using plexiglass, in the wake of Trump's positive diagnosis.

Here's everything you need to know about how to watch the vice presidential debate.

What time is the debate?

The vice presidential debate will run from 9 p.m. to 10:30 p.m. ET without commercial breaks.

Where can I watch the debate?

The debate will air live on CNN, CNN en Español and CNN International.

It will stream live in its entirety, without requiring log-in to a cable provider, on CNN.com's homepage, across mobile devices via CNN's apps for iOS and Android, and via CNNgo apps for Apple TV, Roku, Amazon Fire, Chromecast and Android TV.

Who is moderating and where is it being held?

The debate will be moderated by Susan Page of USA Today and is being held at The University of Utah in Salt Lake City.

What is the format?

This debate will be divided into nine segments of about 10 minutes each, and each candidate will have two minutes to respond to the moderator's opening question, according to the CPD. The moderator will then use the rest of the time in the segment to facilitate a deeper discussion on the topic. There will be no opening or closing statements from Harris or Pence.

What health and safety precautions are being taken?

Pence and Harris will be seated for the debate, and the distance between the center of the chairs will be 12 feet and 3 inches, according to the commission. The moderator will also be seated and will be at a similar distance of 12 feet and 3 inches from the candidates. Plexiglass will be used at the debate, and there will not be a handshake or physical contact between the candidates or with the moderator.

Harris and Pence will be tested for coronavirus before the debate. Once on stage, neither the candidates nor the moderator will wear masks.

Will there be a live audience?

Yes, there will be a small number of ticketed guests, according to the CPD. Everyone in the debate hall will be subject to a variety of health and safety protocols, according to the commission, including coronavirus testing and wearing masks.

"If anyone does not wear a mask, they will be escorted out," the CPD said. At the first presidential debate, Trump's entourage, including his family, did not wear masks, while Democratic nominee Joe Biden's guests and family wore masks.

How many days until Election Day?

As of Wednesday, there are 27 days until Election Day (Tuesday, November 3).