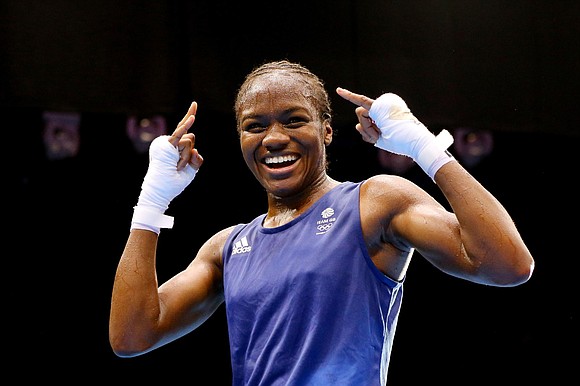 Nicola Adams celebrates winning gold at the 2012 Olympic Games in London. She recently announced her retirement due to fears she could go blind if she continues boxing./Credit: Scott Heavey/Getty Images Europe/Getty Images

Adams, who won gold for Great Britain at the 2012 and 2016 Summer Olympics, said she asked to dance with another woman before accepting the offer to take part in the BBC program.

The move is a milestone for one of the UK's most-watched TV shows, which pairs celebrities with professional dancers and eliminates couples each week via a public vote.

Despite its vast popularity, "Strictly" has faced years of criticism for not featuring a same-sex partnership among its list of contestants.

"I also wanted to thank the BBC for supporting me and making me the first ever all female-pairing, and it's amazing to be a part of the movement for change, diversity and breaking boundaries in the entertainment industry," Adams, who is bisexual, told the BBC in an interview on Wednesday.

Asked whether she made the decision to dance with a woman, she added: "I asked the show about it. They wanted to know if I wanted to be on the show but I said 'Yeah, I will do it, but I want to dance with another female dance partner.'"

"Strictly" is the original edition of the global franchise known in most other countries as "Dancing with the Stars." The show has spread to dozens of countries, with the US version set to premiere its 29th season later this month.

But some of the series, including the BBC show, have attracted criticism for not featuring same-sex dancing partnerships, even when they have included LGBTQ+ contestants.

The Danish version of the show was won by a male couple last year, and the most recent Irish version featured a same-sex pairing.

The show, which is usually filmed in front of a studio audience each week, will return later in the year. The BBC has yet to confirm whether it will feature spectators.