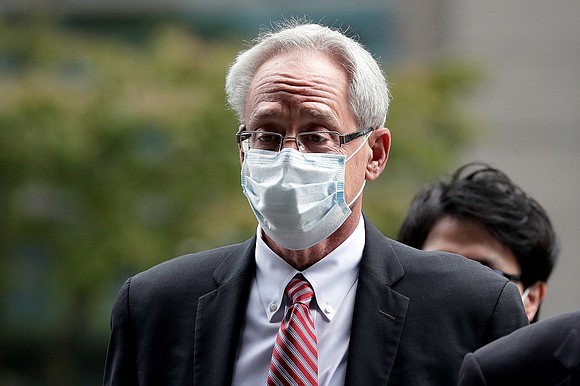 Greg Kelly, a former representative director of Nissan, arriving ahead of his appearance at the Tokyo District Court./Credit: Kiyoshi Ota/Pool/AFP/Getty Images

(CNN) -- Former Nissan executive Greg Kelly has pleaded not guilty to accusations that he helped Carlos Ghosn under-report tens of millions of dollars worth of compensation.

The American businessman and ex-board member of the Japanese automaker appeared in a Tokyo courtroom as his financial misconduct scandal kicked off Tuesday. The trial is expected to last months.

"I deny the allegations. I was not involved in a criminal conspiracy," Kelly told the court. "The evidence will show that I did not break the law."

Kelly was arrested almost two years ago alongside Ghosn, the former chairman of Nissan and the architect of its powerful alliance with Renault and Mitsubishi Motors. The case rocked the global auto industry and led to Ghosn's stunning downfall.

Ghosn was also expected to stand trial in Japan for financial crimes — but at the end of last year, he escaped in dramatic fashion and fled for Lebanon, where he holds citizenship. He remains a fugitive.

Prosecutors claim that from 2011 to 2018, Nissan repeatedly reported about half of what Ghosn had been promised to be paid, concealing over 9 billion yen ($85 million) in compensation. They accuse Kelly and Ghosn of violating financial law by submitting false statements in regulatory filings.

A Nissan executive told the court Tuesday that the company would not contest those charges.

Ghosn has repeatedly railed against the Japanese justice system and claimed that he left Japan because he believes he would not have been given a fair trial. He has also urged the international community to "not forget" about the plight of his ex-colleague, Kelly. (Japanese prosecutors have defended their investigation and said it was carried out in accordance with the law.)

Kelly, whose trial began on his 64th birthday, has remained in Japan and maintained his innocence.

In prepared remarks to the court Tuesday, the former executive said that he had "always consulted with Nissan's attorneys and outside counsel" in discussions about Ghosn's compensation, with the intention of sticking to the law.

Prosecutors allege that Ghosn and Kelly first came up with ways to conceal the auto chief's income after Japan introduced new compensation rules in 2010. Those rules required high-earning executives to report their pay — but Ghosn had already been paid more than he wished to disclosed, according to prosecutors.

Kelly denies those allegations. He claims that Ghosn reduced his pay in response to the new regulation. That led to concerns that there would be a "retention risk," Kelly added, as Ghosn's earnings were significantly lower than that of other senior executives elsewhere.

Kelly said that he looked into different methods of compensation with the intention of keeping Ghosn — whom he described as "an extraordinary executive" — employed at Nissan.

The trial could last for as many as 10 months. If found guilty, Kelly could face a sentence of up to 10 years in prison.