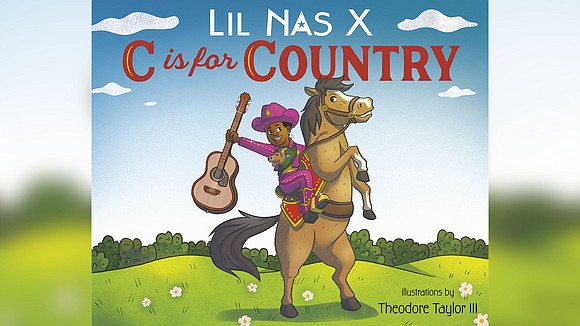 'C is for Country' is a children's book by rapper Lil Nas X./Credit: Penguin Random House

(CNN) -- Lil Nas X is on the road to becoming a published author.

The Atlanta-based rapper, whose song "Old Town Road" is the longest-running No. 1 song in history, has written a children's book called "C is for Country." It's due out early next year, he announced on Twitter last week.

The Grammy Award-winning artist, whose real name is Montero Lamar Hill, said in a tweet he's "dropping the best kids book of all time soon! ... I can't wait to share it with you all." The book will be released on January 5, 2021, he wrote.

The picture book is "perfect for music lovers learning their ABCs" and will feature Lil Nas X and "Panini the pony on a joyous journey through the alphabet from sunup to sundown," according to Random House Children's Books, the book's publisher.

The book's artwork will be done by illustrator Theodore Taylor III.

There will also be "plenty of hidden surprises for Nas's biggest fans," Random House said on its website.

The 21-year-old, who was sleeping on his sister's floor not long before the release of "Old Town Road" in 2019, is breaking barriers as a young queer Black man blurring the lines between country music and hip-hop. In 2019, Time named him one of the 25 most influential people on the internet.

The book is now available to preorder at Barnes and Noble, Amazon, Target and other book sellers, according to Random House.