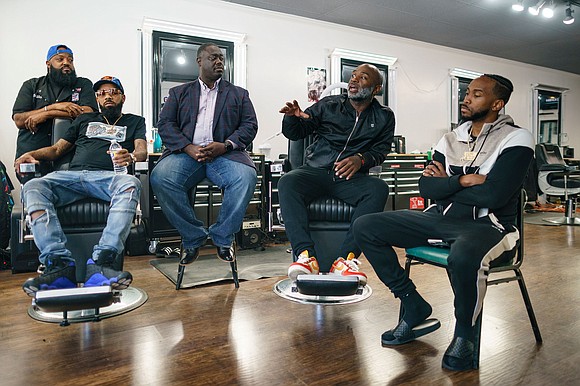 Aaron Bethea, second from right, speaks during a discussion about voting with other Black men at Anytime Cutz barbershop. Mandatory Credit: Elijah Nouvelage for CNN

(CNN) -- Aaron Bethea says he has voted election after election for US presidents, governors and senators -- and yet those lawmakers have done little to nothing to improve life for him, his family or his community.

Bethea said he believes the issues he cares about, financial freedom and equal investment in predominately Black schools, have largely been ignored.

"Where we are from, nobody really cares about what Black men think," said Bethea, an Atlanta father of six who owns a wholesale company that sells televisions. "They don't do anything for us."

Bethea, 40, said he still plans to vote Democratic in Georgia's hotly contested gubernatorial and US Senate races. But he's not voting with enthusiasm. He said he is hoping that one day someone will prioritize the needs of Black men.

Bethea is not alone. Political analysts, researchers and Black male leaders say politicians are failing to reach some Black men with messaging that resonates with them and visibility in their communities. Those shortcomings could particularly hurt Democrats in the upcoming midterms given Black men are the second most loyal voting bloc for the party next to Black women, experts say.

And while Black men have increasingly supported Republicans in recent years, some say the GOP is still missing the mark. Many Black men say they are concerned that Georgia Republican Senate candidate Herschel Walker does not represent them in a positive light given his many public gaffes, history of domestic violence and being an absentee father.

Political analysts worry that the lack of effective messaging could result in Black men sitting home on Nov. 8 and Democrats like Stacey Abrams -- who has made a late attempt to reach Black men with a series of events -- losing their races.

"If some of them feel unmotivated because they don't feel spoken to then you've really got a problem," said Jason Nichols, a professor of African American studies at the University of Maryland College Park. "A lot of these campaigns don't hire Black male advisers. They don't hire Black men to actually tell them how to reach Black men."

So far, 39% of Black voters have been men, and 61% have been women, according to Catalist, a company that provides data and other services to Democrats, academics and nonprofit issue-advocacy organizations and gives insights into who is voting before November. Those breakdowns were the same at this point in the early voting period in 2020.

Some polls have suggested that Black men were gradually leaving the Democratic party to vote for Republicans. In 2020, 12% of Black men voted for former President Donald Trump.

Ted Johnson, a senior director at the Brennan Center for Justice, said some Black men find Republicans more attractive because they promote individualism and the idea that hard work, not government dependence, leads to financial success. In 2016, Johnson wrote in the Atlantic that a Black person who supported Trump was likely a "working-class or lower-middle-class Black man, over the age of 35, and interested in alternative approaches to addressing what ails Black America."

Still, Johnson said Black men are not naive and will vote against a Republican candidate who they feel is unfit. And for some Black men, that is the case with Walker who is running against incumbent US Sen. Raphael Warnock.

The match-up between Walker and Warnock is one of the closest and most critical Senate races in the country, as Republicans seek to win back control of the body, which is currently split 50-50 with Vice President Kamala Harris casting the deciding vote.

Walker has been criticized by his opponents for being violent toward his ex-wife and the claim that he paid for the mother of one of his children to get an abortion. Walker told Axios last year that he was "accountable" for his past violent behavior, and that people shouldn't be "ashamed" for confronting mental health issues.

In an interview with NBC News, Walker acknowledged that he sent a $700 check to a woman who alleges the money was provided to reimburse her for an abortion, but denied the check was for that purpose. Walker has been vocal about his anti-abortion views but has gone back and forth about whether he supports exceptions.

Walker is currently polling at 11% with Black men compared to 74% for Warnock.

"(Walker) is just not an attractive, viable candidate for most Black folks," Johnson said. "I think there are Black men who won't vote for Stacey Abrams but will vote for Raphael Warnock."

Recent polls show Republican Gov. Brian Kemp with support from 16% of Black men compared to 77% for Abrams. Johnson said he believes Kemp has more support from Black men because some men still refuse to vote a woman into office.

"There is a strain of conservatism in Black men that comes with a strain of sexism," Johnson said, noting that in 2016 some Black men sat home because they didn't like Trump but also didn't want to see Hillary Clinton as the first female president.

In recent years, Republicans have faced criticism for being sexist, misogynistic and rejecting women's rights.

Walker's candidacy was the topic of discussion for several Black men who gathered at Anytime Cutz barbershop in Atlanta on a recent Monday afternoon. The chat was part of a series hosted by the Urban League of Greater Atlanta's Black Male Voter Project and Black Men Decide offering Black men a chance to discuss voting and the issues that matter to them.

Some of the Black men present said they found it offensive that the GOP would pit Walker -- a former NFL running back with no political experience and a troubled past -- against Warnock, a beloved figure in Atlanta's Black community who pastored the church once led by Rev. Martin Luther King Jr.

"The guy is looking like a fool," said Antwaun Hawkins, a 46-year-old barber. "That's who we want to put in place to speak for us? Because he's a Black man? No. To me, he looks like an idiot."

Bethea said after the barbershop event that Walker's candidacy feels like a "sick joke."

"I think he's embarrassing himself," Bethea said. "I don't play the field in a position that I don't know how to play. Someone talked him out of staying in his lane."

Bethea said he plans to vote for Warnock because he's a more qualified candidate and pillar in the community.

Those stereotypes are "that we are aggressive, we aren't intelligent and we are abusive," Akinade said. "It portrays Black men as being violent. And that's still inaccurate."

But one barber said he doesn't think voters should judge Walker by his past.

Black men interviewed by CNN said they look for more than just character and experience in politicians, but also the issues they address.

A report released by the NAACP in September found that Black men believed racism/discrimination, inflation/cost of living and criminal justice reform/police brutality were the most important issues facing the Black community. The survey also concluded that 41% of Black men disapproved of the job President Joe Biden is doing to address the needs of the Black community.

Most said they vote in elections but rarely see lawmakers making decisions that help them personally or their communities.

"Do something about policing," Hawkins said. "Do something for the people that can't really help themselves. I don't think people choose to be homeless and hungry."

Hawkins and Bethea said they have given up waiting for policies that will close the wealth gap and give Black Americans a fair shot at success. They are focused on providing for their families.

"We can't sit around and wait for legislation to change because the kids are at home hungry," Hawkins said.

Some of those same sentiments are felt by Black men nearly 900 miles away in New York.

Mysonne Linen, a popular activist and rapper from the Bronx, said he can't remember the last time a political candidate spoke directly to Black men during their campaign and delivered on those promises after winning. Linen said Black men are tired of "pandering." Linen wants politicians who genuinely care about Black men living in marginalized communities and will follow through on addressing police reform, livable wage jobs and investment in mental health resources.

"They have to do a better job with having tangible results," Linen said. "Tell us how you to plan to invest in the communities to change those realities. Get into office and actually fight to do those things."

In the past few months, Abrams has hosted a series of events that targeted Black men in Georgia and released a "Black Men's Agenda" that details her plans to invest in Black-owned small businesses, expand Medicaid, increase funding to schools and opportunities for job training and hold police accountable.

But Linen and Nichols agreed that Abrams' efforts may have come too late. Nichols said he fears that some Black men are already planning to sit home on Election Day or vote for Kemp.

"I think she didn't necessarily get the right advice at the right time and now it feels like she's pandering," Nichols said. "I think she really is concerned but I think it comes across to some like 'we've been ignored all this time.'"

Nichols said he urges 2024 election candidates to do more outreach to Black men and Black families. The organization Black Men Vote has already launched a national campaign to register one million Black male voters by November 2024.

NAACP President Derrick Johnson said those seeking public office must prioritize the needs of Black men if they want to win.

"It is incumbent upon both political parties and all candidates to understand that the votes of African American men are not guaranteed," Johnson said. "It's an important voting bloc and candidates must speak to them so they can see how their vote really can support democracy and their quality of life."