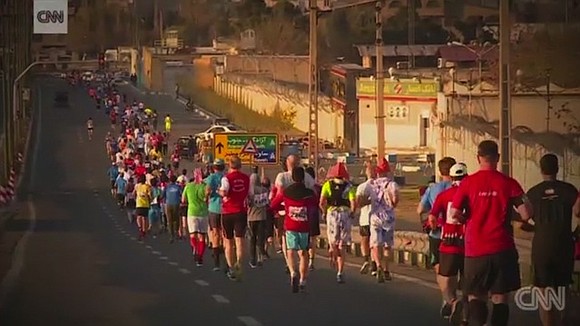 (CNN) -- Hundreds of runners participated in "TehRUN" -- the Iranian capital's first international marathon -- on Friday, but many were left disappointed after authorities reportedly denied US citizens visas and prohibited women from taking part in the full race.

The race was organized by Dutchman Sebastiaan Straten, who told CNN he saw the event as an opportunity for Iran to "build bridges" with the international community and break down stereotypes.

But after months of "tedious" preparation and grappling with Iran's "challenging political climate," Straten's dream crumbled.

Not only that: the organizer himself was prevented from entering Iran for "unclear reasons," despite having been granted a visa.

Perhaps Straten shouldn't have been surprised by the challenges faced by the Tehran race.

Last year, his travel company Silk Road Tours -- which organizes tours of Iran -- held a similar marathon in the Iranian city of Persepolis, which women were blocked from participating in due to the country's religious customs.

This year, the I Run Iran event website said 442 runners from over 45 countries, including Australia, Canada, Saudi Arabia and Britain, had registered for the Tehran marathon. It listed 28 Americans among those -- although according to Straten, some US citizens were denied visas -- and many women were allowed to register.

But once again female participation proved a controversial point in the Muslim nation.

Women hold their own unofficial race

Initially female runners believed they would be able to participate in the 26-mile (42-kilometer) race, although the event website made it clear they would need to wear a headscarf or sports bandana covering their hair, long-sleeved shirts that came down over their hips, and avoid shorts.

But in the weeks prior to the event, their status became a point of confusion, with organizers unable to confirm whether or not they would be able to run at all.

"I sincerely regret the promises I had made to female runners that they would be able to run, and (to) the US and UK runners who were very motivated that were not able to secure their visas," Straten told CNN.

Days before the event, women racers -- many of whom were in Iran at that point -- learned that they would not be allowed to run alongside men, due to the country's strict segregation rules, and could only partake in an indoor 6 mile (10km) "ladies run."

Hadi Ghaemi, the executive director of the Center for Human Rights in Iran (CHRI) told CNN there was "no justification for separating women and men."

"By segregating males and females at the last minute and forcing women to run a shortened route away on the outskirts of the city, officials have not only failed in delivering what they promised, but also subjected women, local and foreign, to discrimination."

As a result of the last minute changes, some women staged their own marathon.

Karin Brogtrop-Beekman, who attended the event from the Netherlands, told CNN that she and a group of other women ran the first 20 miles (32km) at a women's park.

"We came up with this really peaceful solution and we just figured it out late in the afternoon yesterday (the day before the event)," she told CNN.

"We decided to do our own event at a women's park somewhere up the mountain. Just a 700 meter loop all the time and then we jumped into a taxi to the (Azardi) stadium, got into our official clothing and then ran the 10 kilometer (6 mile) race."

Brogtrop-Beekman said despite being let down by organizers, the women still enjoyed themselves and were happy with the outcome.

She wrote on Instagram: "We just want to run. No officials, bad organization or stupid rules can stop us."

Tara Kenkhuis who is originally from the Netherlands, told CNN that although she was disappointed she wasn't able to partake in the half-marathon she signed up for, she said overall the event achieved what it had set out to do in terms of 'building bridges."

"It was really cool to see 106 women running together in Tehran in a stadium that's normally not even open to women.

"It was really inspiring for me to see the smiles upon the faces of the Iranian women there who saw all of us foreigners coming (to Tehran) just for this run."

Kenkhuis said after the race many women -- foreign and Iranian -- went out and planned to meet again.

She said despite a few glitches prior to the race, organization of the actual event -- mostly by Iranian volunteers -- was "impeccable."

A 'first step' in building bridges

Straten, who previously lived in Iran for four years, told CNN that despite the many setbacks of this year's race, he believed there were some positive outcomes.

"The roads were blocked, it was safe and nothing seriously bad happened, so in that way I think it was a success."

And while he admits there is still a long way to go to bridge the gap between nationalities and genders, he views this year's marathon as a great "first step."

Iran's Foreign Ministry has not responded to CNN's request for comment.