Maryland Rape Survivors No Longer Need to Prove They Fought Back 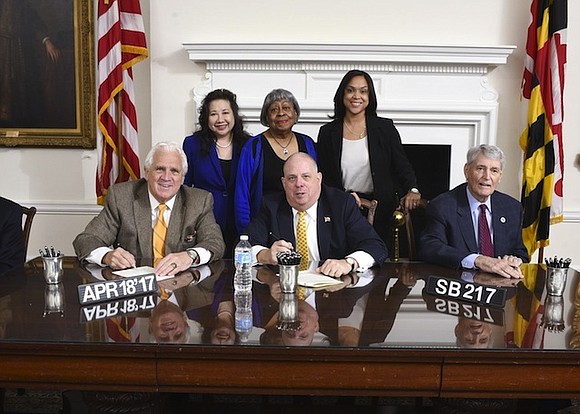 Maryland Governor Larry Hogan signs SB 217 surrounded by state and local law enforcement officials. SB 217 changes the state's legal definition of rape, bringing it in line with most other states.

(CNN) -- Sexual assault survivors in Maryland don't have to prove they physically fought their attackers to establish that a crime occurred under a new law signed by Gov. Larry Hogan.

SB 217 changes the state's legal definition of rape, bringing it in line with most other states. Hogan signed the bill Tuesday along with a series of other measures intended to reform procedures in sexual assault investigations.

Previously, the statute required evidence of force or "threat of physical force" and lack of consent to charge someone with a sexual offense. Lawmakers and advocacy groups said the statute's language led detectives and prosecutors to search for evidence of physical resistance to prove force or lack of consent. A 2016 BuzzFeed News investigation found that the Baltimore County Police often labeled reports of sexual assault as "unfounded" if there was no evidence the survivor fought back.

The new bill explicitly states "evidence of physical resistance by a victim is not required to prove that a sexual crime was committed."

The change was needed to bring Maryland's law up to date with the rest of the country, said its sponsor, Sen. Delores Kelley.

"Given that survivors increase their chances of being maimed or killed if trying to physically resist the rape, this bill will clarify that a victim of rape does not have to fight the perpetrator or put up physical resistance in order for the court to hand down a guilty verdict," Kelley said.

Supporters of the legislation applauded its passage, saying it means survivors would no longer have to choose between further endangering themselves or losing access to justice.

"It is past time to change this law," said Lisae C. Jordan, executive director & counsel for the Maryland Coalition Against Sexual Assault. "Victims should not be expected to physically fight off a rapist and our criminal law should recognize that no means no."

Hogan also signed the Protecting Victims of Sex Trafficking Act of 2017. This legislation updates the definition of sexual abuse to include sex trafficking, regardless of whether the sexual abuse was committed by a parent or any other guardian.